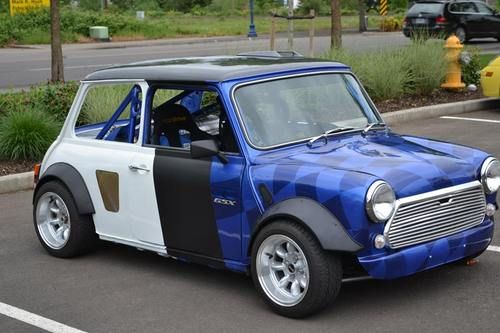 Has 6-speed sequential gearbox and a reverse mechanism. Powered through a Ford limited-slip diff and Ford driveshafts and CV joints.

Engine controls: To enable tuning using a laptop computer, it has a Power Commander 3 USB that allows adjustment of the fuel and ignition maps. Also has an ignition advancer and gear indicator

Wheels are 7x 13 Superlites with new road tires. Also included is a set of racing slicks.

For road use, it has headlights, turn signals, horn and wipers.

Comes with clear acrylic windows all the way around. I drive with them out, but you have the option to put them in if you would like.

Car has around 1000 miles on it and has a clean title and is 100% Street Legal, and I do drive it around town. Absolutely the most popular car at any car show, as well as the fastest at the track. The car will destroy 911's, corvettes, vipers..pretty much anything out there. Spend $50k building your own or buy mine! Car is sold as is and no warranty.

If you're a manufacturer, there are only so many ways you can say "sorry" after your automated e-mail system goes berzerk and spams everyone on your mailing list with hundreds of the same message. Mini recently found itself in that very spot, and rather than respond with a sheepish mea culpa, the company's PR team took a different tack by sending owners a very unique gift box. How unique? Inside, one owner found a set of chocolate roses, a roll of duct tape and a genuine can of Spam.
In an accompanying note, the company said it hoped the sweets would help patch things up between the company and the victims of the e-mail barrage, but in the event that wasn't enough to do the trick, the duct tape was there to help out. And the can of Spam? That tagged along just for stress release. Apparently the canned meat is squeezable. We wouldn't know. You can check out full photos of the gift box here.

We fell in love with the Mini Superleggera Vision Concept from the moment we laid eyes on it. The little convertible blends retro and modern together better than any Mini in years. There is even more good news about the roadster as well because the company is considering actually building it. We even have some renders of what the production version could look like.
Mini boss Peter Schwarzenbauer tells Automotive News at the 2014 Concorso d'Eleganza Villa d'Este, that the Superleggera might have a life beyond its debut. "We wanted to test how Mini enthusiasts worldwide were reacting to such a different type of Mini. So far, it has re
ceived overwhelming appreciation," he said to AN. But here's the bad news. All of the unique elements of the droptop wouldn't be cheap to build. Pricing would likely be around 35,000 euros if BMW gives it the green light, according to Schwarzenbauer. It's too early to know whether the road car would use the electric motor from the concept or something more conventional.