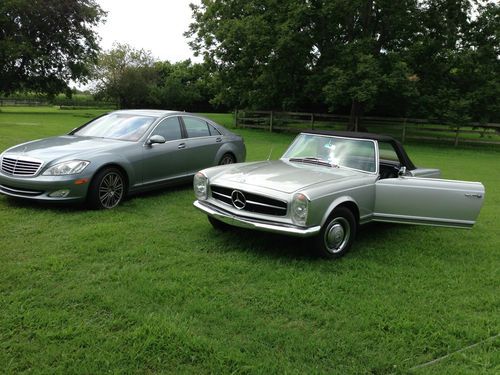 Condition: UsedA vehicle is considered used if it has been registered and issued a title. Used vehicles have had at least one previous owner. The condition of the exterior, interior and engine can vary depending on the vehicle's history. See the seller's listing for full details and description of any imperfections.Seller Notes:"Excellent, please refer to description and the many pictures. Over $65,000 invested over last ten years. No fifty year old sportscar is perfect. This car is loved and used and ready to enjoy for many more years."
1967 MERCEDES BENZ 230SL - $65,000+ invested (please read entire description and see all photos - thanks for your interest and good luck!)
I have owned this car for ten years, purchased from previous owner in Tahoe, CA in 2004, always a clean and dry car owned throughout it's known history by enthusiasts who have been willing and able to do the proper care and stewardship of the car. The car has been extensively restored under my ownership between the years 2004 to 2010. I will let the pictures best describe the cosmetic/paint restoration and present condition of this W113. Extensive mechanical restoration was done by Dan Caron, President of SL Barn - someone who is an expert on 190SL and W113 (230SL, 280SL) and is an invaluable resource for W113 owners. He completely rebuilt and detailed the engine, Bosch mechanical fuel injection, fuel pump, the manual transmission, new clutch, pressure plate, new master and slave cylinders and associated systems. Restored dashboard including gauges and light bulbs and dash trim. Brake lines serviced and new brake master cylinder. GAHH German canvas soft top installed and in great shape and is of original quality. Wood is new (Heritage Restorations) with the original walnut trim and of original quality. The indicators and turn signals and windscreen wipers function perfectly. Engine runs strong and true and gears shift easily. I love to drive this car! I live a very busy life and have realized that I don't have enough time to drive the car as much as it deserves (only 1200 miles during the past twelve months).  I am therefore selling this car because I feel that it should be enjoyed by someone who can spend time driving it daily - these cars are built solidly like tanks and maintain their systems in good repair best when regularly driven.
You will notice that the car has the original 230SL radio delete plate on the dashboard, and that is in fact how the car was delivered originally. There is an antenna installed on the fender should an owner wish to install a radio. I like the sound of the engine and the look of the 230SL on the dashplate, so I never did. Also, there is the original wheel block and jack installed in place in holders under the spare wheel, which holds the tool kit inside of the wheel cover.
Here is excerpt of Mr. Caron's report to me (3/10) after work completed (2008-2010):
------------------
I have inspected this vehicle in all aspects and know this car very well.

This car is virtually rust free. All floor pans and frame rails show no signs of
corrosion or of previous repair and are believed to be original. This
vehicle appears to be accident free. The body panels are free of dents, rust
or scratches and the paint has a nice shine in all areas.

All of the lights, both interior and exterior, work as they should and all
gages are functioning as required.

The engine was rebuilt using all new parts and is in perfect running
condition. This included pistons, bearings, oil pump, timing chain, valve
seats, valves and all new gaskets. The machining work was done by a highly
respected expert regarding vintage engines. All the engine parts were
cleaned and painted or anodized as per original. All engine assembly was
done at SL Barn either by me or under my close supervision. The careful
break-in was done entirely by myself and I've logged over 1,500 miles of test
driving with no incidents or problems.

The transmission is a fully synchronized four speed gear box which was also
rebuilt. We used all new bearings and seals throughout the box and it
operates quietly and shifts effortlessly. We also installed a new clutch and
pressure plate as well as a new master and slave cylinder.

Driving impressions:
The engine starts easily and comes to a fast idle as required. As the engine
warms the idle speed lowers and comes to a steady idle. The engine runs
smoothly and has no leaks or unusual noises. The engine bay is nicely
detailed and correct for this year of car. All components show well.
The clutch works smoothly without and jerking upon release. The transmission
shifts smoothly from one gear to the next, either up or down shifting. The
steering runs straight and true without any wandering to either side. The
brakes pull the car down quickly without fading or pulling to either side.
The power steering is smooth and operates quietly.

All gages read normally while driving at full oil pressure and 180 degrees F
on the temperature gage. Signals work properly, high beam and fuel gage
works as required. Speedometer, odometer and tachometer all function
normally. Heater levers are free and the heater blower motor is working. The
heater gives adequate heat and shuts off fully for summer driving.
All in all, a very pleasant car to drive.
--------
Few things are needed to do on this car, but no fifty year old sportscar is perfect. Among these include: there's a small paint chip on the opening edge of the driver doorjamb (it's hardly noticable except by me because I remember exactly when I opened the door against a small table, easy fix), I would replace the headliner of the hardtop (I painted the hardtop and it looks great but I never use it and didn't get to the headliner), the original chrome rearview mirror needs tightened up where it swivels on the stalk (it moves too loose recently, easy fix), maybe rechrome at least two of the wheel trim rings at some point, always considered removing the leather wrap from the steering wheel and polishing it back to shiny, an easy thing to do.
The car and hardtop (stand included with sale) is stored indoors and covered with a car cover on the coast of Virginia.
Car sells with clear title and bill of sale to winning bidder and full payment in proper and guaranteed transfer of US funds, in the usual and legal manner. I am willing to help with meeting your shipment company and assist on this end. I can also suggest an excellent shipper who as an excellent reputation who I have used for several cross-country transports of expensive antique cars over the years.  The president of the company has a pagoda SL and he knows this vehicle well, if you need a recommendation.