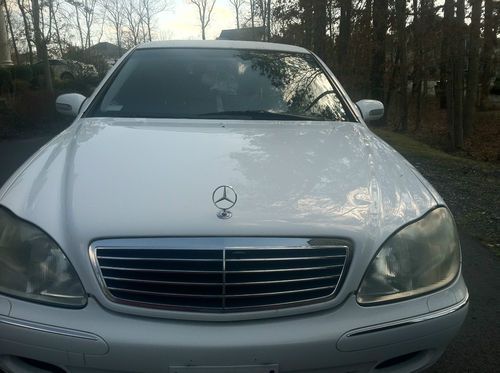 Condition: Used: A vehicle is considered used if it has been registered and issued a title. Used vehicles have had at least one previous owner. The condition of the exterior, interior and engine can vary depending on the vehicle's history. See the seller's listing for full details and description of any imperfections. ...
2000 Mercedes Benz S430 Limousine for sale by owner AS IS! Price: $12,000 or best offer.
This vehicle is in overall good condition with very low mileage for its age. Mileage: 50,065
Engine is in great condition and it runs great!
This vehicle is a great buy given the low mileage plus the condition of the engine and interior.
The leather interior is in great condition as well. This limo comes with all amenities.
You only need worry about the cosmetic damages.
Damages to car are mainly cosmetic due to changing weather conditions and regular usage.
Some rust on the sides and side skirts. Small crack on the rear bumper.
Front windshield is cracked and hood is slightly dented due to a tree fall during Hurricane Sandy.
Vinyl roof has wear and tear from regular use and changing weather. Rear view mirror is hanging out of place but can be fixed.
Some minor repairs were done to the vehicle.
Please inbox me or call me at (609) 748-3373 if you have any questions.