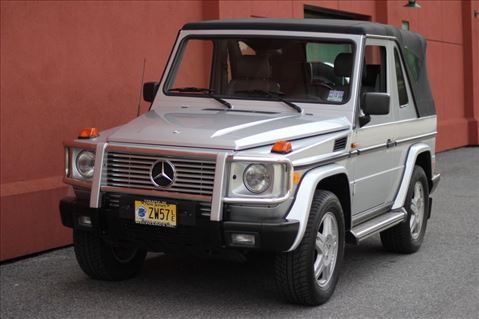 Please email me with any questions or requests for additional pics or something specific at: cammiecccouey@ukmodels.net .

Rare G Wagon Cabriolet. 1999 Mercedes G500 Cabriolet. The power top convertible G Wagon. Purchased new in 1999
by the owner of one of the countries largest MB dealerships and Imported properly by G Cab expert Europa. This G
wagon has never been off road and always a weekend pleasure vehicle. This rare collectible truck has recently been
fully serviced by G Wagon specialist Wolfgangs in NJ. The entire truck was gone thru at a cost of over $16,000
making sure the truck drives as new including 5 new tires. The entire truck is stock except a modern Alpine head
unit with sat radio and bluetooth has been added. (I have the original head unit with the truck as well). I have all
books, records, manuals, and the original window sticker to the truck.