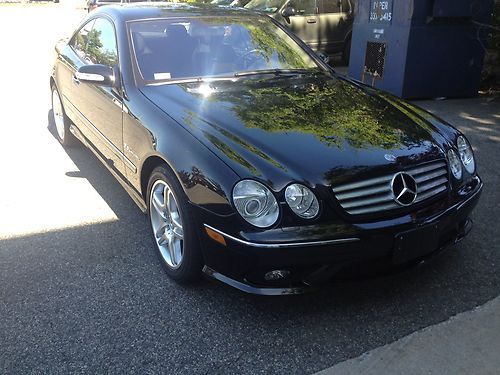 2003 MERCEDES BENZ CL55   BLACK/ BLACK LEATHER.  5300 MILES  THIS IS NOT A MISPRINT  THIS CAR HAS ONLY 5300 MILES. IT IS IN AS NEW CONDITION AS ONE CAN BE.  BACK SEATS NEVER SAT IN. THE PICTURES YOU SEE WERE TAKEN WITH OUT A CLEAN UP OR DETAIL. THE PAINT IS FLAWLESS NEVER TOUCHED THE INSIDE STILL SMELLS NEW. IT'S NEVER BEEN IN SNOW OR RAIN UNDER THE CAR IS LIKE NEW,UNDER THE HOOD IS LIKE NEW. OTHER THAN A COUPLE OF SMALL MARKS ON THREE WHEELS ITS PERFECT. TO DRIVE THIS CAR IS LIKE DRIVING A NEW ONE ,TIGHT FAST SMOOTH AND QUIET. MIGHT BE THE ONLY ONE IN THIS CONDITION WITH THIS MILEAGE. ALL BOOKS TWO KEYS AND NAVAGATION DISC'S GO WITH THE CAR. THERE ARE NO STORIES OTHER THAN THE OWNER PUT IT IN THE GARRAGE AND NEVER DROVE IT. THIS IS A RARE OPORTUNITY TO OWN A NEW CL55 FOR CLOSE TO A HUNDRED THOUSAND LESS THAN IT COST WHEN FIRST BOUGHT. ANY QUESTIONS CALL JOHN  516 659 0596