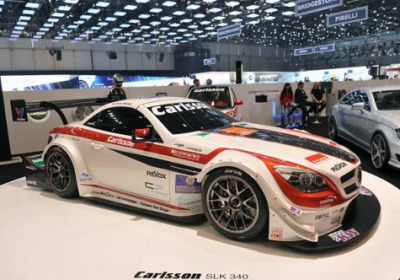 Carlsson has been expertly tuning Mercedes-Benz products for more than 20 years now, but we can't say as we remember the outfit turning out anything quite so racy as this SLK 340 Judd that it has brought along to the Geneva Motor Show this year.

This SLK is meant for competition, obviously, and Carlsson has already booked the car to race in several hill climb events in the E1 category. The purpose-built racer should have a fighting chance to do well in said races, with a shape vetted in wind tunnel testing for maximum downforce, the SLK uses a carbon-fiber bodyshell to help achieve a curb weight of just about 1,720 pounds.

The featherweight SLK's name comes from its 3.4-liter V8 engine, which churns out a wicked 610 horsepower to go with its 317 pound-feet of torque. A Hewland transmission with paddle shift operation manages all of the thrust.

In addition to the European hill climbs on the docket, Carlsson intends on dicing with the likes of Hyundai and Suzuki in this year's Pikes Peak race. We look forward to seeing the SLK on that famous run, to be sure. Find a bit more information about the Carlsson SLK 340 Judd in the official press release below.

The newcomer in international motorsport captivates with an abundance of modifications. The engineers have subjected the car, which was built from scratch on a body shell, to a comprehensive weight-loss regime. At the same time, it also received a power boost. Thanks to the use of the most modern materials, the Carlsson SLK 340 JUDD weighs in at only 780 kg on the scale. To accomplish this, an ultra lightweight body kit made of carbon was used. The aerodynamic components have been tested extensively, even in a wind tunnel, to connect a spectacular look with a perfect downforce. A closed underbody will further optimize the air resistance of the hill climb race car. Despite extensive changes, the SLK in its racing suit with its powerful rear wing looks extremely stylish. "We developed the design over a long period of time and with lots of feeling. We are proud of the awesome look. As an engineer, it is a pleasure to contribute to such a project, and we can show everything that is technically possible in the vehicle in cooperation with Carlsson", says Dipl.-Ing. (FH) Markus Schuster, Managing Director of Carlsson Germany.