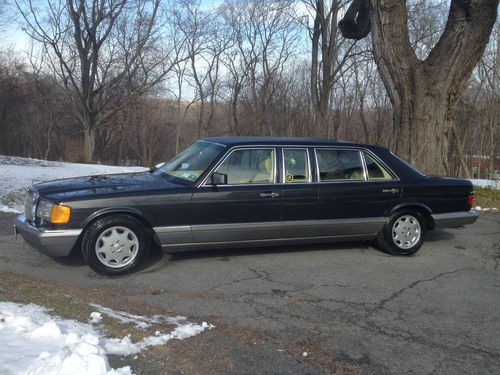 Built in Beverly Hills in 1987, this bespoke Limousine has never been in livery service.
A timeless design that includes, a privacy intercom to the Chauffeur, power rear bucket seats,
rear sunroof, Alpine sound system, TV and refrigerator. Oversized picnic tables with Bar and
and many storage compartments. Lambs wool overlays and bolsters.
Included are two sets of wheels with new tires. One set for winter and a chrome set for summer.
Recent service includes, new Brakes and master cylinder, rear Hydro Nitrogen chamber shocks,
spark plugs and wires coil and distributer. Tuned to perfection this fuel injected engine is in excellent
condition.
This low mileage Limousine has always been in private ownership and is a rare opportunity for the Mercedes Benz enthusiast.