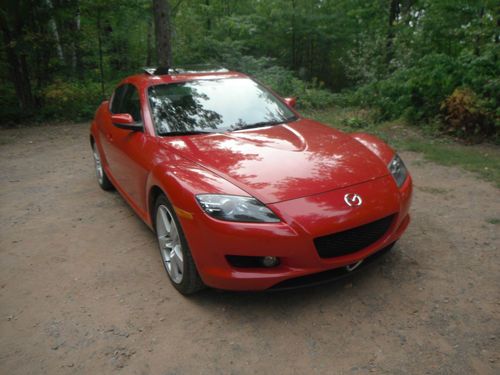 This is my CLEAN TITLE Mazda Rx8 Gt. I am selling the car so that I can purchase a new vehicle. I am looking for at least 500 over my trade in value of 9,200 for those of you that are bidding, retail is right arround 11000 on Kbb, the reserve is set to sell!! I know everyone says this on ebay, but this Rx8 truly is a gem for a rotary vehicle. I and the other owner were rotary enthusiasts meaning that this car has been kept up to date on all services, meaning the oil was changed at least every 2500 miles with additional oil added as needed. Almost all these miles are highway miles meaning there a a few small rock chips here and there, but otherwise the paint is near flawless. This is a great car, with the 6 spd manual, and hard to find two tone tan and black leather interior. I have also had some work done recently. New Pipes, cat back exhaust, all new coils, drilled and slotted brake rotors with new ceramic pads in the front, new 18" stock rims with hancook venus 12 tires (initial 4, plus a refurbished included), and I also have a dashboard and harness kit for aftermarket stereo instillation included. Like I said, this car is the child of a mechanic and enthusiast, so dont miss out! Happy bidding!