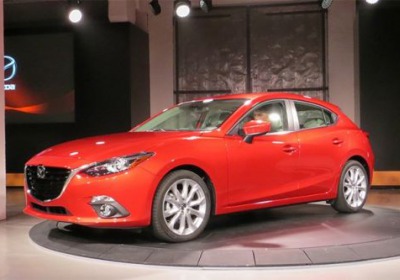 Those numbers exactly match the fuel economy targets that Mazda had set for the car when optioned with the 2.0-liter Skyactiv-G with 155 horsepower and 150 pound-feet of torque. For comparison to other cars in the segment, the EPA numbers for the 2013 Honda Civic sedan are 28 city, 39 highway, 32 combined when its 140-hp, 1.8-liter four-cylinder is paired with the five-speed automatic. The Hyundai Elantra GT gets 27 city, 37 highway and 30 combined according to the EPA when its 148-hp, 1.8-liter four-cylinder is paired with either a six-speed manual or six-speed automatic transmission. The numbers for the 2014 Ford Focus aren't out yet.

Sedan That 2.5-liter SkyActiv-G gets 184 hp and 185 lb-ft of torque, the capacitor-equipped i-Eloop system meant to help buyers who choose that engine get a few more mpg.