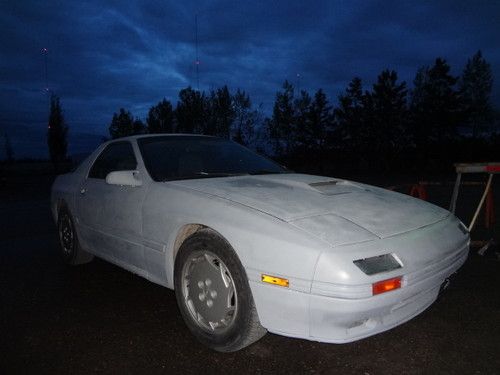 The car is the second generation Mazda RX7 FC with a intercooled twin scrolled turbo 13b rotary
has been in storage for over 10 years it is in primer and needs to be finished
under 10k on rebuild and new suspension
New battery
New alternator
plugs, wires, belts and all filters
aftermarket exhaust and other mods. I don't have the specifics
Transmission is a 5 speed mated to a limited-slip rear-end with DTSS suspension.
rack and pinion steering
rare factory aluminum hood with scoop
also factory electric sunroof
new brakes
hide-away headlights , tilt steering, cruise, and Ac., power doors and windows
dash is clean and crack free and interior is in good condition
title is free and ready to be sold