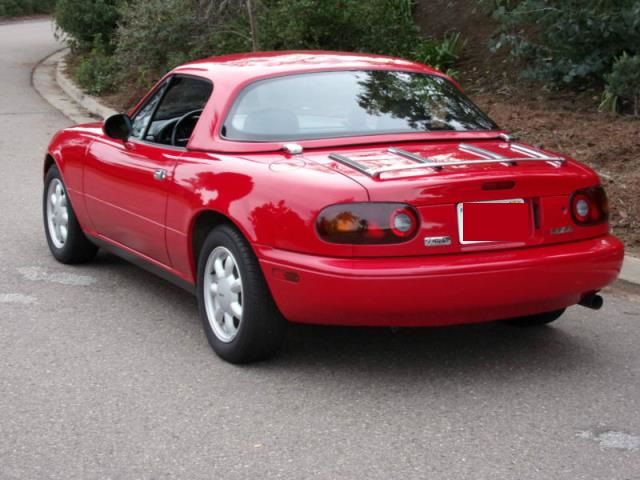 16,000 miles from new, all original except tires. Runs and drives like a new car, still feels tight and fresh(new). Air conditioning works ! Has power steering , power windows, cruise control, and factory hardtop. This is a time capsule , great opportunity for anyone that missed getting one when they came out 25 years ago. Also perfect for a collector, enthusiast or as an investment. This very well preserved Miata is close to perfect, there are a few things to know.Although the roof is in excellent condition the rear window shows dark discoloring along the upper edge. It is not much of an issue as the rest of the window is clear and rearward visibility is not a problem.The tires were replaced as they should be at ten years of age. Even though the current tires look good they should be changed because of age.

Mazda has a long motorsports history, and one that is peppered with fascinating cars. The latest chapter in Mazda's racing story has just been written, as Joel Miller and Andrew Carbonell have driven the Visit Florida Racing Mazda6 Skyactiv-D to the car's first ever victory at the Rolex Grand-Am GX race at Road Atlanta. The win marks the first ever for Mazda's diesel-burning, production-car based Skyactiv-D racer, and the first win for a diesel-powered car in a Grand-Am event.
In fact, it was a particularly good day for the Mazda Motorsports team, as a Mazda6 also picked up the third finishing spot at Road Atlanta. Director of Mazda Motorsports, John M. Doonan, said of the racecar, "We've always said that the best street cars make the best racecars, and, with more than half of the components in the race engine being shared with the street engine, this program is a solid proof-point."
SpeedSource Engineering, which helped to build the Mazda6 racer, was greatly heartened by the car's performance in just it's fourth-ever race. Owner Sylvain Tremblay called the victory, "a tribute to the thousands of hours of hard work over many months," continuing, "The normal plan with a new car is to spend the first year in development, the second year seeking race wins, and challenging for a championship in year three. We are already at our year-two status after four races. We can't wait to get to the Belle Isle course in Detroit for round five."