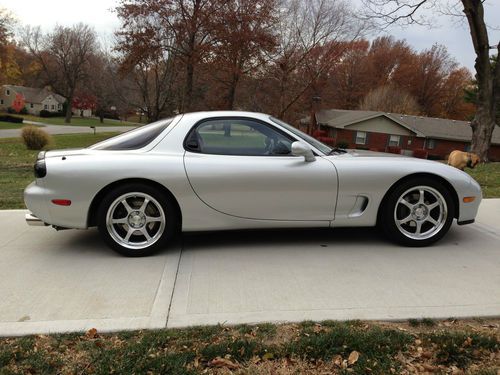 VERY RARE - ONLY 39,900 MILES - EXCELLENT CONDITION
5 Speed Manual Transmission - Preferred Equipment Package
For sale by second owner, owned and meticulously maintained since 1999.  This car has been garaged, well kept, never been in snow, probably driven in rain fewer than 10 times in the past 12 years.  It is mildly and tastefully modified with the following options, but includes all stock parts and wheels as well:
Includes original owners manual and ALL STOCK PARTS (buyer responsible for pick up or shipping of parts).  If you want a stock RX7, simply put the stock parts back on and make some cash from selling all the upgrades.  I have performed most of the minor maintenance on this car myself, oil changes every 1,000 miles, gear oil and differential oil recently replaced, brakes tires and all other maintenance items are all good.  The PowerFC ECU replacement eliminates the 3500 RPM hesitation that all stock RX7's experience (due to secondary turbo's coming online) and makes the car run fantastic.  It has the ability to control boost and all engine ECU parameters, though this car has never boosted above 10psi (stock).  I purchased this car in 1999 with 16,000 miles on it and have used it as my fair weather fun car and on occasional driving school days at the track.
This car is not quite perfect, but as close as I've seen in a very long time.  The last two images are an attempt to show two small scratches on the exterior, there are no dings or dents, the car has never been in any accidents, the wheels are 100% clean no curb rash, and has been garaged at all times during my ownership.