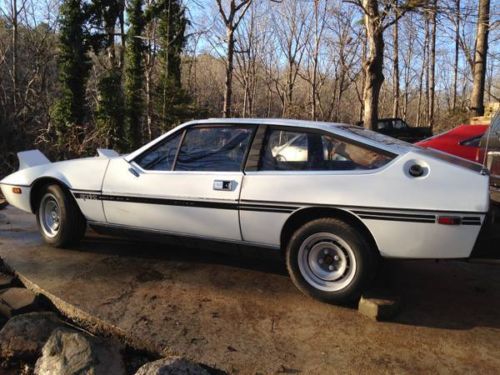 Seeing a model as long-lived as the Lotus Esprit evolve over time generally requires some clever photography or graphical work, kind of like this. This video doesn't require any of that trickery, though, because it features every single model year of Espirt in one glorious row of awesome British cars.
Taken at the 2013 Lotus Festival at Brands Hatch in the UK, it features Esprits from 1976 all the way to its last model year in 2004. It really puts into perspective the slow evolution of the mid-engined, wedge-shaped Lotus, as it went from a very 1970s design to something decidedly more modern.
We've got the full video below, which starts with a red 1976 model, travels down the line to a silver 2004 Esprit, and then all the way back to the original. Take a look, and let us know what you think.

With only three manufacturers supplying engines in Formula One this season, the teams have been fairly evenly split: Ferrari, Sauber and Marussia use Ferrari engines; Mercedes, McLaren, Williams and Force India run on Mercedes power; Red Bull, Toro Rosso, Lotus and Caterham employ Renault power units. But one important team is reportedly preparing to ditch Renault and switch to Mercedes for next year.
That team is Lotus, an outfit which has fallen off its pace the past few seasons but which has still been a vital partner for Renault. That's because until a few seasons ago, the team based in Enstone, UK, was owned by Renault and bore the company's name. The operation was founded in 1981 as Toleman, was rechristened Benetton in 1986, bought by Renault 2000, taking the company's name in 2002, sold to its current owners Genii Capital 2009 and adopting the black and gold Lotus livery in 2011. As Benetton, it ran Ford engines until switching to Renault in 1995, sticking with the French outfit ever since, but that decades-long partnership - which meandered through Renault ownership and back out again - is now apparently drawing to a close.
The departure of Lotus as a customer team ought to allow Renault to focus instead on its increasing ties with Red Bull, which has taken the Enstone team's place as Renault's principal team. It could prove a smart move for the Lotus team as well, as the Mercedes engines have been outperforming the Renault units this season by an order of magnitude: not only is Mercedes far outpacing Red Bull at the top of the standings, but each of Mercedes' customer teams is performing better than Renault's clients.