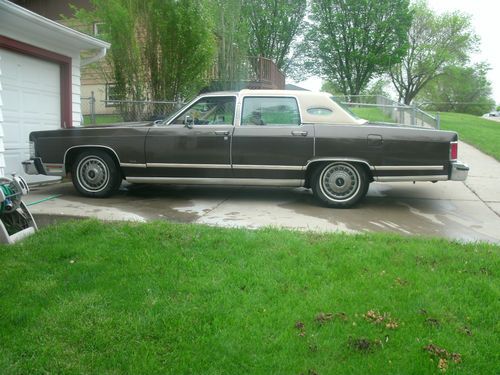 For Auction is a 1979 Lincoln Continental Town Car.  This car is very good shape with original paint, engine, and all trim.  I have driven this car for about a year and love to drive it.  It runs very well and glides down the street.  I get a lot of comments from people of all ages.  It really does catch attention.

The car was bought brand new and owned locally for the first 30 years of its life.  Then it was purchased by someone that wanted to just have it for a cruiser, but never took it out to cruise.  I have had it now for about 15 months.  The car has been taken care of and still runs great.
The GOOD!
Everything works.  8 track, AM/FM Stereo, power antenna, power windows, power seats, cruise control, vacuum power head light covers (both open on close, no winking), rear defroster, heater, wipers, inside side mirror adjustments.  All exterior and interior lights work.  The only option that is not currently fully working is the A/C.  The compressor was changed at some point and a switch was inserted under the dash.  The belt has been removed.  The compressor works, but I believe it needs to be charged.
The engine runs very well for its age.  It should have a tune up and could use some carb work done to it.  I have only ever changed out a coolant hose since I have owned it.
The transmission is great.  There is no slipping and it shifts very nicely.
Tires are almost brand new and it comes with a matching spare that has never been used.
All the glass is in good shape with no chips or cracks.
Paint still shines with the exception of the hood area.
All chrome and stainless is in good shape and will shine nicely.
The NOT SO GOOD...
Paint is thin on the hood and trunk areas.  Not bad yet, but noticeable.
The vinyl half top has some hail damage to it.  You can see it in the pictures.
There are a few places where paint has chipped off, but has not rusted.  Namely on the fender skirts.
The front bumper has a dent in it.  It was there when I bought it...I have no idea how it came to be.
The back bumper has a dent in it.  I put it there.  The car is long so backing up can be a challenge in a tight spot when a pole jumps out behind you.
There is an area where the paint has been rubbed off by the passenger side tail light.  I believe this happened when someone was not paying attention and they grazed the car with their bumper backing out of the next parking spot.  Like I said...the car is very long.
Carb work as mentioned above.  It is hard on gas...about 8 miles to the gallon.  When it is warm it will diesel a little bit.  It starts again right away..but I have never had time to have it looked at.
There is dual exhaust on this car.  This car never came with catalytic converters so there are none.  Both mufflers need to be replaced.  One is completely blown out. (it set the car alarm off on the car sitting next to me).  The pipes are in good shape but they are not shiney new.  As far as I have seen they are not loose nor full of rust holes.
The interior is leather and is cracked in places, but over all it would clean up nicely.  The headliner is nice is tight.
**There is no body rust on this car!!!!
I have included some pictures.  If you want something specific, just let me know.
PayPal only.  Auction price does not include a reserve and does include shipping or transport charges.
Please ask any and all questions before bidding.