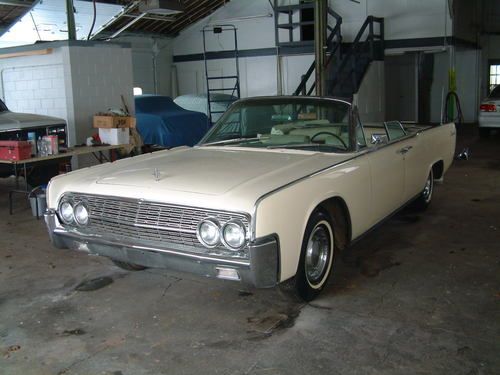 I am offering up my 1962 Lincoln Continental 4 door convertible with 65,000 actual miles.

The car was purchased in the spring of 1991 from the estate of Henry Shakespeare (owner of Shakespeare Rod and Reel Co. in Kalamazoo Mi.) I was told Mr. Shakespeare purchased the convertible in the fall of 1961 for his wife, and it remained hers until it was sold at auction in 1991.

Shortly after I bought the car I replaced the complete 4 muffler exhaust system, front and rear brakes, front and rear shocks and all four whitewall tires (Firestone sup-r belt deluxe champion J78-14) and are 95% of new. My wife and I drove the car every summer from 1991-1995 and always stored it in a heated garage during the winter.

In 1996 I began a restoration project to the right side of the vehicle. There were a couple of thin spots behind the right front wheel and behind the right rear wheel, I cut these spots out, and just never found the time to finish the project. The right front and rear doors are rustfree with a few small dings that have been repaired and primed and are ready to be reinstalled. (see pics) The undercarriage appears to be solid.

The car needs a good overall cleaning from sitting so long, but the black and white leather interior and the chrome should clean up nicely.

We always enjoyed driving the Lincoln, it rode like a couch, and turned alot of heads everywhere we went. We entered it into a few local car shows, and took home a trophy for people's choice and earliest entry, just to name a couple. We enjoyed driving and showing the car so much that I decided to make it perfect, so the restoration project began. Shortly afterward I was in an accident, broke 4 ribs and my collarbone, so I couldn't finish. In retrospect, I wish I had just left well enough alone, the car was nice like it was and was already winning trophies.

So now you know as much about the Lincoln as I do. Hope you enjoy looking at it.

we reserve the right to end auction early for local sale