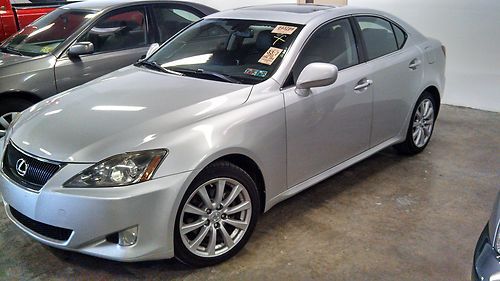 Condition: Used: A vehicle is considered used if it has been registered and issued a title. Used vehicles have had at least one previous owner. The condition of the exterior, interior and engine can vary depending on the vehicle's history. See the seller's listing for full details and description of any imperfections. ...
Up for sale is beautiful 2006 Lexus IS 250 AWD. This vehicle is equipped with all the bells & whistles. Power, heated, and ventilated seats, power locks, power windows, power & heated outside mirrors, cruise control, am/fm stereo, 6 disc in-dash cd player, satillite radio, navigation, aux plug, steering wheel controls, steering wheel shift paddles, backup camara, and intergrated phone hookup? This vehicle has a smooth shifting 6 cylinder that can be driven automatic or like a stick shift. This vehicle drives 100%, and when you purchase your getting the reliability and comfort of a Lexus. The miles currently read 97,000. Asking $17,500 trade-ins welcomed. Contact Larry at (609) 402-7104. Thanx for looking! Please don't hesitate to call I have other vehicle to choose from!