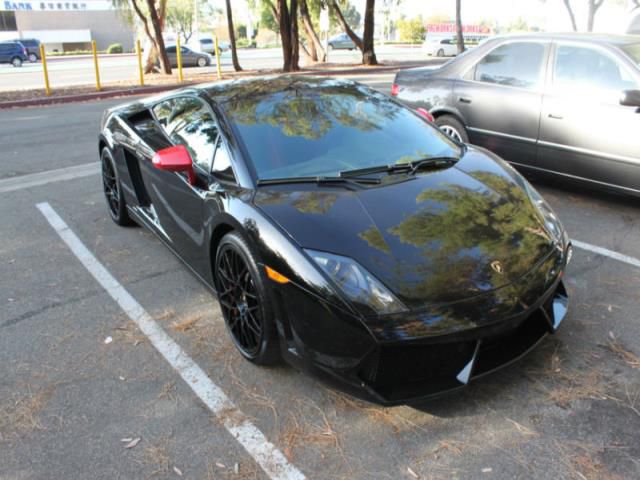 2013 Lamborghini Gallardo LP-560-4 4 wheel drive Black on black/red interior. The red side view mirror and engine bay is all from factory. Gallardo has produced many special edition like the superleggera and performance edizone. They are too stiff to drive on the street and the carbon bucket seat offers 0 comfort. The 2013 Lamborghini Gallardo has produce many 2 wheel driver version. (I believe they want to reduce the cost) and makes the LP560-4 (4 wheel drive version) much more valuable. The Lamborghini LP560-4 to me is the most suitable street super car which you can go out for a dinner without killing your butt while you can hit the track the next day. This car comes with lots of carbon fiber, and grippy Alcantara interior.

Way back in 2008, Los Angeles Lakers' shooting guard Kobe Bryant created a minor uproar with a viral video filmed and released by Nike. In it, the 16-time NBA all-star vaulted a moving Aston Martin. The promotional plug of the whole thing was that Bryant's ups were courtesy of his new Nikes, although he later admitted that "Hollywood" had a big part in the video.
This new video is allegedly real, though, and comes without the help of a promotional plug for a basketball shoe. It stars a Swedish man named Al the Jumper. Rather than an Aston Martin, Al jumps a Lamborghini Gallardo Superleggera, which is heading right for him at 80 miles per hour. It is, if it's as real as claimed, a very impressive feat, especially after seeing how handily Al clears the Lambo.
Scroll down for the video and then head into Comments and let us know what you think.

I found it to be a rare, genuinely rewarding educational experience.
Lamborghini is putting more effort into its North American motorsports efforts and promotion, so we recently attended its first-ever Intensivo driving school at Mazda Raceway Laguna Seca, spending a day behind the wheel of both its Huracán and Aventador supercars. Offered under the Squadra Corse banner, Experienza is designed to provide a taste of Lamborghini's cars on a circuit, Intensivo is designed to maximize track-time learning, and Accademia and Advancada - only in Europe for now - are focused on the driver and driver technique. Beyond those, Squadra Corse can also provide Super Trofeo instruction to get you fit for the Blancpain one-make series and GT3 racing, too.

A few of the coolest police cars on the planet

Police cars are faster, more athletic and even better looking than they have been in generations.
Nobody likes getting a ticket. It's expensive, embarrassing and annoying. And when the officer ambles back to an ancient Ford Crown Victoria, more than a few of enthusiasts have had the tantalizing thought: I could have outrun him.