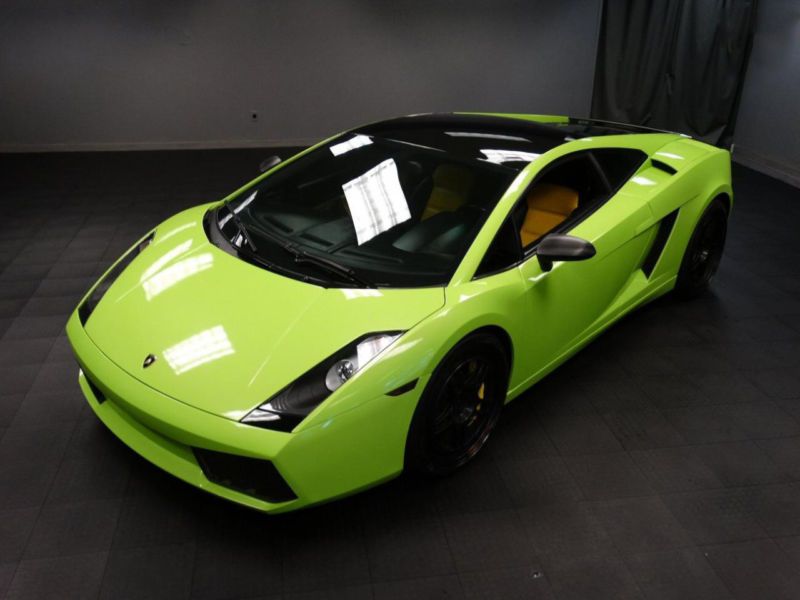 Highlights: custom Formula 43 wheels, thunderous – head turning - TUBI exhaust, optional hatch glass engine
compartment cover, exterior carbon fiber accent panels, carbon fiber engine compartment panels. 3M wrap –
installed due to the conditions of most of the roads in my state. The wrap was painted with Lamborghini green
basecoat then clearcoated prior to installation. The original paint color underneath is Lamborghini yellow. The
mirrors are also wrapped with 3M carbon fiber vinyl. If you’re concerned about the condition of the paint under
the wrap, wrap removal is negotiable.
2014: ball joints rebuilt and fitted with zerk fittings in the process, now better than oem. Control arms
replaced left/right side. ECU F1 Egear control unit (hydraulic pump) replaced. Custom 3 piece wheels built by
Formula 43 installed. Custom exhaust work – after a few comments from a neighbor I had my mechanic install
removable SuperTrapp exhaust tips. I ended up never needing to use them so they are new in the box.

The resulting unalloyed joy, as you'll see in the footage below, is priceless.
One of my defining moments as a budding car enthusiast came the first time I got to see a Lamborghini up close. I was out in Los Angeles visiting a relative with my mother and sister, and I took the change of scenery as an opportunity to look for more exotic cars than my middle-class Midwestern upbringing would usually encounter. We were on a walk, when off in the distance I saw - and heard - something extraordinary: An early '80s Lamborghini Countach, black with those bronze five-hole wheels, pulling into a parking spot. My mom still takes great joy in periodically retelling the events of that day, and as the story goes, I joyfully took off without warning, chasing the car down the street shouting "Lamborghini!" "Lamborghini!!" in my best eight-year-old Italian accent.

I found it to be a rare, genuinely rewarding educational experience.
Lamborghini is putting more effort into its North American motorsports efforts and promotion, so we recently attended its first-ever Intensivo driving school at Mazda Raceway Laguna Seca, spending a day behind the wheel of both its Huracán and Aventador supercars. Offered under the Squadra Corse banner, Experienza is designed to provide a taste of Lamborghini's cars on a circuit, Intensivo is designed to maximize track-time learning, and Accademia and Advancada - only in Europe for now - are focused on the driver and driver technique. Beyond those, Squadra Corse can also provide Super Trofeo instruction to get you fit for the Blancpain one-make series and GT3 racing, too.