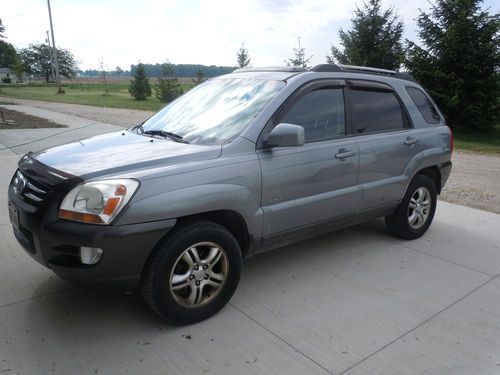 For sale 2005 kia sportage.  This is my girlfriends car she has owned and driven it for 5 years.  Excellent condition black leather interior.  Overall nice condition.  It has one baseball dent in passenger door that could be repaired with dent wizard.  Everything works as it should.  Selling due to growing family and buying a minivan.  Thanks and good luck

The third-generation Sportage has been around for a few years now, but Kia is making some minor changes to its compact crossover for 2014. As expected with a small, mid-cycle refresh, there isn't anything too major to report here, but the important news for the 2014 Sportage involves what's behind that modestly updated fascia.
Kia has revamped the Sportage's base 2.4-liter inline four-cylinder engine to add direct injection, which is said to improve efficiency, although no fuel economy numbers have been released yet. Switching to DI has also increased the engine's output, up slightly from 176 horsepower and 168 pound-feet of torque in 2013 to 182 hp and 178 lb-ft for 2014. Additionally, LX models now receive the sportier shock setup previously available only on EX and SX trims.
More importantly, the base trim level has been dropped from the 2014 Sportage lineup, meaning the car's manual transmission has been axed, as well. Pricing hasn't been released yet, but the 2013 Sportage already undercut competitors like the Chevy Equinox and Toyota RAV4 by thousands of dollars, so even a modest increase for 2014 would still position the Kia rather nicely in the segment.

Last month, Kia released a few photos of the European-market 2014 Soul ahead of its Frankfurt Motor Show reveal, and we happened to notice that the hamster box looked a bit different - a bit tougher. That's because Kia is adding an SUV Styling Pack to the car's options list, which includes the blacked-out lower fascias, wheel arches, side skirts and painted roof seen here.
At the time, we polled Autoblog readers if they thought bringing the optional visuals to SUV-happy North America was a good idea, and the voting split 70.3 percent in favor, 21.4 percent against, and 8.3 percent undecided.
At the present time, Kia representatives tell us that it has no plans to offer the SUV Styling Pack in our market, so you'll have to take a better look at it with our new gallery to decide whether its absence from North American order sheets is a tragedy or not.

Hyundai, Kia and U of M studying 'highway hypnosis'

Next up on the hot-button list of things that can kill you behind the wheel: "highway hypnosis." That's the zombie-like, autopilot phase you get into on a long highway drive when there isn't much to distract you, like curves or traffic. Digging further into what it is and how to combat it, Hyundai-Kia engineers and the University of Michigan are commencing a study that will measure brainwave activity in order to track the body's slide into highway hypnosis.
We're not sure how much overlap this has with Mercedes-Benz's Attention Assist, which tracks more than 70 in-car parameters to determine when you're not focused on the road anymore. That system is billed as an alarm against fatigue, in our experience it does more than that - if you use your phone while driving, for instance, it will chirp.
They don't know what form a warning system will take yet, but Hyundai-Kia plans to develop a method for warning drivers when they being to zone out. According to the National Highway Traffic Safety Administration, there were more than three thousand deaths and nearly 400,000 injuries due to distracted driving in 2011.