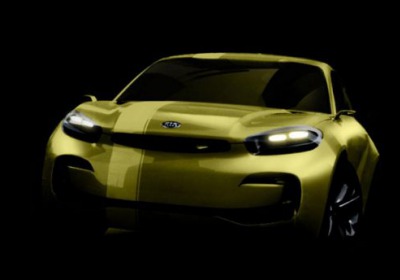 Kia has announced it is headed to the Seoul Motor Show with a new sedan concept. Details are still scarce, but the Kia CUB Concept should be small, at under 13 feet long and come with coupe-like proportions. Kia wants the vehicle to "appeal to trend-setting urban dwellers," a notoriously car-hungry market. The automaker says the Cub has a cheerful face decorated with two-point LED headlamps just like those found on the Quoris flagship, but the teaser image above looks a bit more sinister than happy to us. Kia plans to give the Cub a proper unveiling on March 28.

Hyundai has also given us a glimpse at what the company has planned for Seoul with its HND-9 luxury sports coupe. You can refresh yourself on that machine by checking out the post here. You can also take a closer look at the brief press release below.

NEW KIA CUB TO SPRING A SURPRISE IN SEOUL

The new Kia 'CUB' is less than four metres long and is styled to appeal to trend-setting urban dwellers.

CUB is both sleek and small, with a super-smooth exterior, a cheerful face, a daring character and headlamps that feature two-point LED lights – similar to those on the Kia Quoris flagship saloon that is available in certain markets outside of Europe.