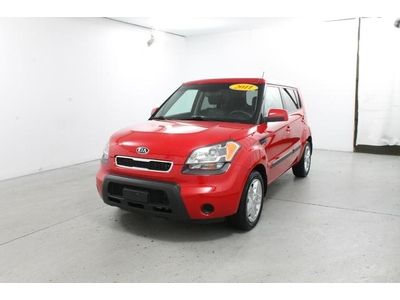 Kia is looking to bolster its premium-car lineup beyond newly conceived products like the Cadenza and Quoris. Perhaps the best evidence of this initiative, to date, is the Cross GT Concept that has just been unveiled at the Chicago Auto Show. Showing a larger, more premium crossover to slot in above the Sorento, the Cross GT Concept hints at a future product that could be what the ill-fated, body-on-frame Borrego never had a chance to be.
Compared to the current Sorento, the Cross GT Concept is 8.4-inches longer, 4.9-inches wider and rides on a wheelbase that is increased by 15.7 inches, and it shows a new possible styling direction for Kia as the automaker continues to attempt to venture up market. Some of the upscale styling cues include the clamshell hood. upright front end with signature Kia tiger nose grille and the multi-panel panoramic roof. The true luxury of the Cross GT is apparent inside where Kia has used real wood trim and rich leather on the seats, and there's also the buttonless, touch-screen infotainment system; rear occupants will have flat screen monitors with Internet access.
Based on a chassis shared with the rear-wheel drive GT Concept, which we first saw at the 2011 Frankfurt Motor Show, the fullsize Cross GT crossover is powered by a 3.8-liter V6 paired to Kia's hybrid system that gives the luxury crossover a combined output of 400 horsepower and 500 pound-feet of torque, as well as an all-electric driving range of 20 miles. The engine is paired to an eight-speed automatic transmission, which helps send power to the wheels through an advanced, torque-vectoring all-wheel-drive system

With reveals expected to include the 2015 Ford F-150, the new Chevrolet Corvette Z06 and the high-strung Lexus RC F performance coupe (among many others), there are plenty of vehicles we're looking forward to seeing at the Detroit Auto Show. But now, with a rendered teaser image and short press release that includes some savory details, Kia may have just hit the top of our list with its GT4 Stinger Concept. Not even looking at the above image (which you can click to enlarge), Kia managed to grab our interest with just one sentence in said release detailing the car's powertrain: "A turbocharged 2.0-liter that pumps 315 horsepower to the rear wheels."
This low, wide concept has the face of a Kia-fied Audi R8, but the previous teaser stated that the concept will be a 2+2 hatchback. There is little other information to go on, but we'll see the concept car live in just 10 days. Until then, scroll down for the brief press release.

The 2014 Soul is bigger and more refined, and Kia says its look has been inspired in part by the Track'ster concept. Interestingly, European buyers will get the option of a different look than what we'll see in our showrooms. They'll be able to specify the SUV Styling Pack seen here, which includes matte-black cladding on the front and rear fascias, along with what Kia refers to as piano-black trim on the wheel wells and side skirts. The roof is available painted black, white or red. With all of that black trim and slightly tougher look, the styling reminds us of the Fiat 500L Trekking, a model the Soul will compete directly against.
European markets also have the ability to spec their Souls like our North American version, which substitutes body-color trim for most of the black pieces. Currently, there are no plans to bring the SUV Styling Pack to the US. But that doesn't mean we'll never be able to buy this butch-look Soul on our side of the Atlantic. Company spokesperson James Hope confirms to Autoblog, "[Kia] has no plans to offer something similar to the EU-spec Soul at this time. However, we are always monitoring the market and if we saw an opportunity we would certainly look into it."
Feel free to peruse the press release below for more details on the Euro-spec Soul - which is slated to debut at next month's Frankfurt Motor Show - and then let Kia know if they should bring the SUV Styling Pack here by participating in our poll below.