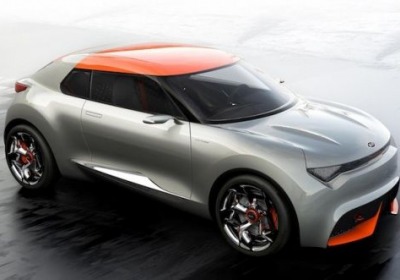 The machine you see above is, according to a report from Autocar, the Kia Provo Concept, and it's set to debut at the rapidly approaching Geneva Motor Show. As you can see, the Korean concept draws inspiration from young and hip hatchbacks like the Mini range and the Citroën DS3.

We can't say how much of the Provo's somewhat radical conceptual design will make it into production, such as the contrasting roof color, oversize wheel arches filled with some pretty radical wheels, and one-piece headlight and taillight housings. Suffice it to say, though, we're definitely intrigued by what we see.

Also note the diamond stitching in the interior with chrome, suede and carbon fiber accents. The flat-bottom steering wheel is also rather interesting. These details, along with the racy elements of the exterior design, make us think Kia may be targeting performance-minded buyers with the Provo.

We don't know what's powering this concept, but we'd expect some sort of forced-induction four-cylinder engine sending ponies to the front wheels if such a machine were to make it into production. Stay tuned for all the details from Geneva within the next few days.