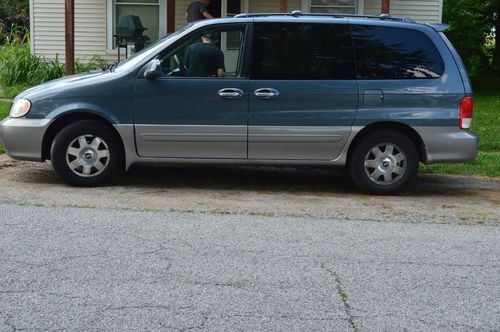 Condition: UsedA vehicle is considered used if it has been registered and issued a title. Used vehicles have had at least one previous owner. The condition of the exterior, interior and engine can vary depending on the vehicle's history. See the seller's listing for full details and description of any imperfections.Seller Notes:"AC no longer cold, original alloy wheels missing 2 hubcaps, minor hail dents on hood only (no paint damage, only minor repair required), approximately 3 foot key scratch on passenger sliding door (through clear coat & top layer of paint only, lower-levels of paint still in tact; no rust), & only visible rust on front-most bottom end of hood (inside and out, but much less noticeable on outside)."

Van was purchased through a used-car dealer who received the car from an auction sale by another dealership.

Can arrange locally to meet to see vehicle in Lafayette, Monticello, Kokomo, Flora, Logansport, and Frankfort, Indiana area. Will require proof of title transfer before vehicle will be handed over (receipt from BMV). More pictures available upon request. Pictures included are van, dents on hood, key scratch, rust on hood, wheel, skylight, console, and interior of vehicle.

The machine you see above is, according to a report from Autocar, the Kia Provo Concept, and it's set to debut at the rapidly approaching Geneva Motor Show. As you can see, the Korean concept draws inspiration from young and hip hatchbacks like the Mini range and the Citroën DS3.
We can't say how much of the Provo's somewhat radical conceptual design will make it into production, such as the contrasting roof color, oversize wheel arches filled with some pretty radical wheels, and one-piece headlight and taillight housings. Suffice it to say, though, we're definitely intrigued by what we see.
Also note the diamond stitching in the interior with chrome, suede and carbon fiber accents. The flat-bottom steering wheel is also rather interesting. These details, along with the racy elements of the exterior design, make us think Kia may be targeting performance-minded buyers with the Provo.