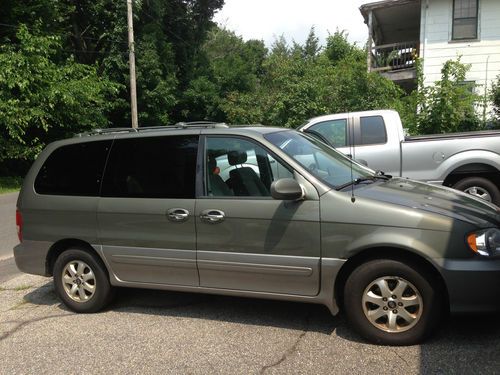 Condition: UsedA vehicle is considered used if it has been registered and issued a title. Used vehicles have had at least one previous owner. The condition of the exterior, interior and engine can vary depending on the vehicle's history. See the seller's listing for full details and description of any imperfections.Seller Notes:"Rear windshield wiper inoperative. Small dent on hood and RF fender and door."

This is the EX with full power seats and sunroof/windows. Front and Rear split climate control. Keyless entry.  Sliding doors on both sides of van. Vehicle has only had one owner.
Buyer responsible for all shipping and associated costs. Local pick up welcome. Can not deliver.

Kia has told dealers that it will bring a $50,000 to $70,000, rear-drive flagship sedan to the United States early in 2014, although it won't be called what you think. Instead of the unloved Quoris name, the full-size sedan will be called the K900.
That name change is a welcomed one, judging by our initial reactions to Quoris. Names aside, though, the K900 sounds like an interesting piece of kit. It'll be riding on the same platform as the Hyundai Equus, although we suspect Kia's car will be quite a different beast than it's corporate cousin. Automotive News is reporting that the K900 should have a pair of engines when it arrives in the US - a 3.8-liter V6 and a 5.0-liter V8. The former puts out 290 horsepower, while the V8, which is likely the same Tau engine found in the Equus, should have around 420 hp. LED headlights, adaptive cruise control and all the other trimmings expected at this price point will also make appearances on the K900.
Kia's national dealer council, Don Hobden, told Automotive News the K900 should represent "7-Series value for a 5-Series price." While Kia wouldn't comment on the new model, AN reports that it's targeting 5,000 units next year, with a limited rollout at select dealerships.