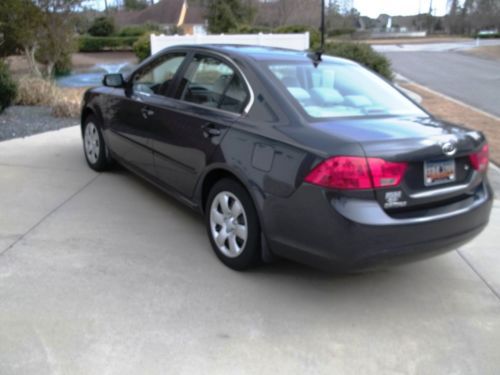 The US-bound 2014 Kia Forte first showed up in sedan form back at the LA Auto Show last year, but Kia unveiled the hatchback version of the car today at the Chicago Auto Show. Unlike the current Forte five-door the 2014 will feature styling that is distinct from its sedan counterpart, but the big news is it will also get a few extra ponies under the hood.
Since the Forte five-door will only be offered in EX and SX trim, the sedan's 1.8-liter inline-four is not offered on this model. The base engine in the EX is the 2.0-liter direct-injected four, producing 173 horsepower and 154 pound-feet of torque. Those looking for more power should check out the Forte SX, which uses the 1.6-liter turbocharged engine currently found in the Hyundai Veloster Turbo. This engine produces 201 hp and 195 lb-ft, and it can be paired to either a six-speed manual or automatic transmission; the latter of which is optional and comes with paddle shifters.
Aside from the obvious styling changes required for the added cargo area, the 2014 Kia Forte five-door gets numerous design elements to set it apart from the sedan. The face of the new hatchback will get a much smaller tiger-nose grille than the sedan, but it will get a larger lower intake, which we can't help but compare to the Mitsubishi Lancer Evo. Kia also gave the Forte dual exhaust outlets and LED taillights, and the SX model will get stylish 18-inch wheels. Inside, the five-door design allows the Forte to increase its cargo volume to 23.2 cubic feet, and the cabin can also be equipped with features such as heated front seats, ventilated driver's seat, navigation, leather seating and dual-zone climate control.

A closer look at the Kia GT4 Stinger Concept

When we named the Kia GT4 Stinger Concept as our top debut at the 2014 Detroit Auto Show, our comments section had, let's call it, a tantrum. People were not pleased. Debuting alongside hugely significant production cars like the Chevrolet Corvette Z06, Ford Mustang, Ford F-150, Lexus RC F, BMW M3/M4 and Chrysler 200 (not to mention great concepts like the Toyota FT-1, Infiniti Q50 Eau Rouge and Volvo Concept XC Coupe), what business did a tiny, turbocharged, rear-drive Kia concept car have winning the prize as the best of Detroit?
Well, as it turns out, it has every right to be there. Our own Michael Harley sat down with the head of US design for Kia, Tom Kearn, to discuss the GT4 Stinger and find out just what the brand was thinking when it decided to create such an enthusiast-oriented concept. The interview gives a great insight into the car and its design, while Harley goes into some detail at the end of the video about why the GT4 was the Autoblog Editors' Choice of the 2014 Detroit Auto Show.
Scroll down to watch the full interview.