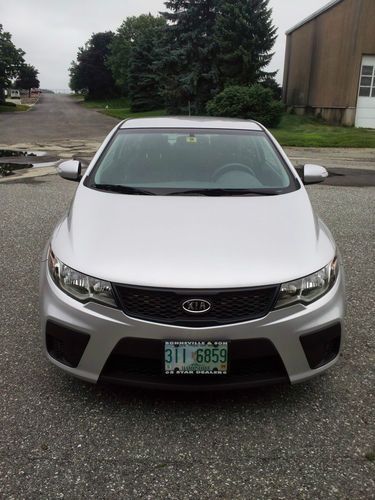 This is a one owner 2010 Kia Forte purchased in Spring of 2011 with only 7,395 miles.  All the maintenance is up to date, and it is in mint condition, needs absolutely nothing.  It gets great gas mileage 35+mpg highway, and a sporty look and feel throughout.

The National Highway Traffic Safety Administration isn't ready to give up its investigation into spontaneously shattering sunroofs in the 2011-2013 Kia Sorento yet. In fact, it has actually broadened it into a full engineering analysis affecting as many as 65,347 vehicles.
The investigation started in 2013 when NHTSA received 15 complaints about breaking sunroofs in the crossover. Since then, the regulator requested data from Kia and found that there have been 95 complaints of the roof abruptly braking. In many of those cases, the vehicle was moving at the time. People have been injured when this happens; NHTSA found 14 incidents where at least one person in the vehicle suffered from cuts or scrapes.
According to the investigation document, Kia also conducted its own internal review but couldn't find any defects. The company claims that the only way for the roof to break is for an object to strike it. Although, it does admit that the large surface of the sunroof on the Sorento could be the cause of the high frequency of damage. NHTSA's Office of Defects Investigation isn't convinced and calls it "concerning." It's pressing forward to find more details in the engineering analysis.

Kia negotiating to build $1.5B auto plant in Mexico

After a string of recent announcements from automakers, Kia may be the next business to break ground on a factory south of the border. The Korean company is reportedly nearly finished with negotiations to build a $1.5-billion plant near the city of Monterrey in the Mexican state of Nuevo Leon. The state's secretary of economic development confirmed the news to Reuters and anticipated talks to be completed in the first two weeks of August. Unnamed insiders also said that the location was aiming for an annual production capacity of 300,000 vehicles.
Rumors from a month ago first suggested the possibility of the new factory. It would reportedly build two models of small cars, and assembly could potentially begin as soon as 21 months after breaking ground. Currently, Kia only has one North American plant, in Georgia, that builds the Sorento and Optima.
In the last few years, Mexico has become of hotbed of North American automobile production. Mazda, Honda and Volkswagen all recently opened new or expanded factories to build cars there. There are even more on the way with a joint venture plant from Mercedes-Benz and Infiniti and BMW's announcement of its own $1 billion undertaking in Mexico.