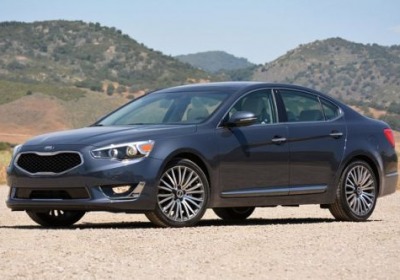 The same recent global economic crises that have led luxury automakers to invade the small car market are also somewhat responsible for the influx of near-luxury sedans from mainstream automakers. As the likes of Mercedes-Benz and Audi are reaching down for new customers, automakers like Hyundai, Chevrolet and Toyota are reaching up to bridge the gap and fill in the white space between the industry's typical high-volume large sedans and established luxury sedans. Joining this emerging market, the 2014 Kia Cadenza is the latest sedan to blur the line between value and luxury. One of Kia's core focuses has been offering value to customers, and even with a starting price of $35,100, the Cadenza still represents plenty of that kind of thinking.

Despite what might first come to mind, the Cadenza is not named after a piece of furniture. Instead, Kia notes the name for its new front-wheel-drive flagship comes from the Italian musical term that translates as 'cadence'. The name thus fits in nicely with the brand's other musically inspired model name, Forte. Much like the Hyundai Genesis, the Cadenza will serve as a test of sorts to see how much customers are willing to pay for a Kia, and despite recent reports indicating that Kia has confirmed the Quoris for next year, the reality is that the availability of the bigger rear-wheel-drive flagship will be determined in part by how well the Cadenza strikes a chord with buyers.

This isn't Kia's first crack at mid-level luxury. That distinction goes to the bug-eyed, Amanti, which was killed off in 2009. The same basic recipe is still in place – V6 power, roomy interior and a lengthy list of standard features, yet this car seems altogether better outfitted to appeal to modern consumers than the baroque Amanti. We headed out to the great weather and even better roads near San Diego to test the 2014 Kia Cadenza to see for ourselves if it has the inner harmony and cadence to keep step with full-size luxury sedans or if it's just here to make a bunch of noise.


The Cadenza was designed by Peter Schreyer – also known as the father of the Audi TT.

Like all current Kia models, the Cadenza was designed by Peter Schreyer – also known as the father of the Audi TT. From where we sit, the Cadenza is flashy enough to stand on its own among luxury sedans while still being recognizable as a Kia. Perhaps one of the more impressive elements of the Cadenza's design is that it looks nothing like its sister car, the Hyundai Azera, while also managing to create enough distinction from other Kia models that customers shouldn't have a hard time cross-shopping brands like Lincoln, Acura and Lexus.

Sure, the Cadenza's look has a lot of BMW 5 Series influence stretching from its blunt, squared-off nose to its pronounced rear decklid, but this is no knock-off. The strong face is anchored by Kia's signature Tiger Nose grille and aggressively shaped headlights, while the rear gets wide LED taillights and Audi-esque oval exhaust outlets. The Cadenza's best attribute might just be its profile. While many competitors are going with lower, sleeker rooflines, the Cadenza has a tall roof to go with its wide haunches and attractive body creases. Speaking of, the best line on the Cadenza is its front door crease – it starts off with a sharp rise that seems to parallel the A-pillar, adding to the design's depth and detail. Tasteful amounts of chrome accents finish off the exterior while 19-inch, multi-spoke wheels hint at the car's European sport sedan aspirations.


No, you cannot fit a credenza in the Cadenza.

Kia knew that if it was seriously going to take on the luxury sedan market, it would need an interior that looked and felt the part. From a styling perspective, this is where the Cadenza shares the most with its showroom counterparts, but that is not necessarily a bad thing. The same styling that makes the Forte and Optima look upmarket in their segments is even more pronounced and works well inside this big sedan. Sprucing up the Cadenza's interior, just about all surfaces are covered in soft-touch material, convincing wood trim or soft leather, and Kia even focused on minor details when creating its lavish cabin, right down to the Cadenza's key fob, which uses a piano black case with what appears to be brushed aluminum buttons. The one big disappointment we noted about its interior was that the buttons on the instrument panel and center stack look and feel identical to pretty much every Hyundai and Kia product currently available.

Comfort is another strong point, regardless of which seat your butt is parked in. The driver gets a 10-way power adjustable seat (including adjustable thigh support) with heating and ventilation, while rear occupants get heated outboard seats and 36.8 inches of legroom. That's a few inches short of competitors like the Chevrolet Impala and Toyota Avalon, felt like it ought to be enough to accommodate all but the tallest of passengers. Also down slightly from its rivals are rear headroom at 37.3 inches and cargo space. The trunk is far from undersized at 15.9 cubic feet, but no, you cannot fit a credenza in the Cadenza.

All Cadenza models will get navigation and leather, but the only models available for us to test were fully loaded with the Luxury and Technology packages. While we weren't able to see what the Cadenza offered in base form, we can say that fully loaded Cadenzas boast equal shares of comfort and high-tech goodies, and our tester increased the luxury quotient even more with the no-cost-option White Package that consists of white perforated Nappa leather seats, dark wood accents and a suede-like material used on the pillar trim and headliner. As-tested, this Cadenza comes in at $41,900, which is about $2,000 more than a loaded Impala, but $8,000 less than a comparably equipped Volvo S80. As an added value bonus, Kia is offering the Cadenza with a three-year, 37,500-mile complimentary maintenance program.

There are plenty of highlights for tech lovers as well, including the standard navigation system with excellent graphics and voice commands as well as the complimentary UVO eServices that offers automatic 911 dialing, Google Maps send-to-car and a function to help you remember where you parked. Optional tech features include Kia's first-ever adaptive cruise control that comes with the Technology Package and the Thin Film Transistor display that is part of the Luxury Package. Unfortunately, while Jaguar, Cadillac and even Dodge use large reconfigurable LCD gauge cluster displays, the Cadenza has what is essentially just a virtual speedometer with a smaller, configurable center display – not unlike the 4.2-inch displays found on many modern cars. While the rest of the interior seems well thought out and executed, this gauge cluster is a case of using technology just for the sake thereof.


The best thing about driving the Cadenza is its refinement.

Like the Azera, the 2014 Cadenza is powered by a direct-injected 3.3-liter V6 producing 293 horsepower and 255 pound-feet of torque ­– enough to make the Cadenza Kia's most powerful model ever. The sole transmission is a six-speed automatic, which also offers manual shifts using either the shift lever or steering-wheel-mounted paddles. While nice to have, we found that manual shift mode isn't often required thanks to plenty of power from the engine and shift points that don't seem geared toward max fuel economy at all costs. The Cadenza still gets average fuel economy for the segment with EPA ratings of 19 miles per gallon city and 28 mpg highway, and it runs on regular-grade gas.

With almost 300 horses at its disposal, the 2014 Cadenza does a great job of motivating its 3,792-pound curb weight, but more than its power, the best thing about driving the Cadenza is its refinement. On just about any road surface, the Cadenza's cabin is extremely quiet, allowing for easy conversations with rear-seat occupants even at highway speeds. Kia says its new flagship has a sport-tuned suspension, and we found the overall ride quality landed somewhere between a cushy luxo sedan and a firmer European sport sedan. The compromise makes for a perfect long-distance driving car; during this first drive, we put about 200 miles on the odometer. Our drive route consisted mainly of tight and twisty roads, which are usually better suited for testing sportier cars than the Cadenza, but at least it packed a lot of steering and brake inputs into a relatively short trip. The Cadenza's electric power steering outperforms many of its rivals in terms of feedback and overall lack of numbness, while the brakes are strong and responsive. Again, this isn't a sports sedan, but we're happy to report that it didn't feel out of place along some of the best roads Southern California has to offer.


If buyers can get past the badge, the Cadenza has the potential to steal customers away from Lexus, Acura and Volvo.

Another benefit of driving the twisties was the opportunity to put features like the adaptive cruise control and lane departure warning systems to the test. Lane departure uses a camera mounted near the rearview mirror, and it releases a rather annoying audible tone when you get close to (even if you don't actually cross) road lines. Kia's adaptive cruise control is one of the smoothest systems we've tested – especially in stop-and-go traffic – and it uses a radar built into the lower air intake of the front fascia. While some adaptive cruise control systems can lose the car they're following during turns, the Cadenza was never beset by this problem, even when facing sharp corners.

The Cadenza's list of obvious competitors include the Avalon, Impala, Ford Taurus and Buick LaCrosse, but if buyers can get past the badge, the Cadenza has the potential to steal customers away from Lexus, Acura and Volvo, and maybe even higher up the ladder to Mercedes-Benz. While it's hard to think of a $42,000 Kia as being a value, the equipment stuffed into a fully loaded Cadenza should make the car hard to overlook for anyone desiring a smooth, comfortable and luxurious sedan.

During the launch presentation, Kia representatives kept commenting about how the Cadenza should be a surprising car, playing on its "Power to Surprise" tagline. After looking at Kia's current portfolio and spending a day with the Cadenza, it might want to consider changing its slogan to "Power to Frighten"... rival automakers. Of course, at this point, anyone who is surprised by Kia just isn't paying attention.

See also: Why BMWs are cheaper than Hyundais in Korea, 2014 Kia Sedona rises from the dead, same as it ever was, South Korea firms up fuel economy regs following Hyundai/Kia debacle.