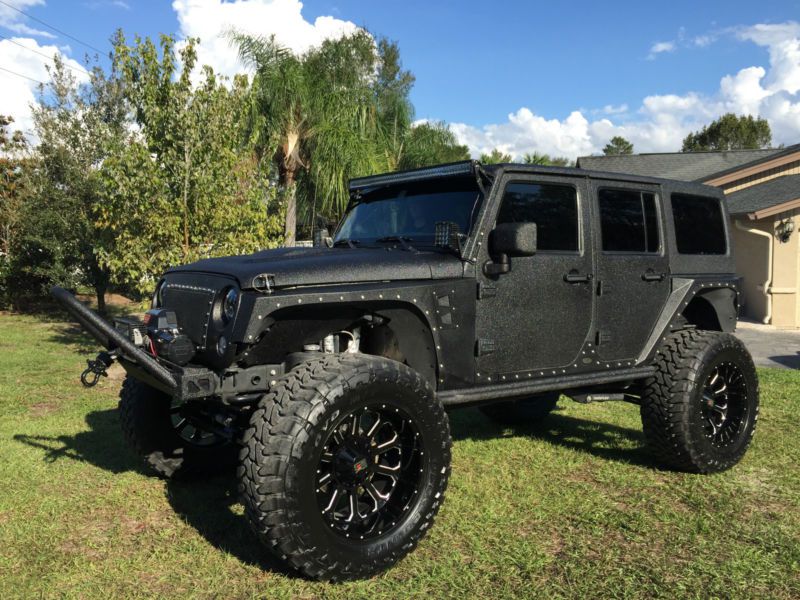 2012 Jeep Wrangler Unlimited JKU Modern Warfare Edition Call Of Duty #2426 of 3500
ABSOLUTELY FLAWLESS BRAND NEW CONDITION! DRIVES LIKE A NEW JEEP....BUT FASTER...HARD TO TELL THAT IT'S A MONSTER!
ENTIRE VEHICLE has been coated inside and out by a LINE-X DEALER including ENTIRE INTERIOR plus INSIDE OF DOORS,
ROLL BAR, GRILLE, UNDER SIDE OF HOOD, BUMPERS and UNDER SIDE OF REMOVABLE HARDTOP.
THIS IS THE MOST QUIET AND SOUNDPROOF JEEP YOU WILL EVER FIND.....NOT TO MENTION....INDESTRUCTIBLE!!!
BUILT BY A TERAFLEX DEALER AS THEIR SHOW VEHICLE
40" Tires, 22" wheels, XRC fenders and body armor ALL BRAND NEW....LESS THAN 2000 MILES SINCE COMPLETED!
FACTORY NAVIGATION WITH BLUETOOTH VOICE CONNECT.
YOU WILL GET MORE ATTENTION IN THIS TRUCK THAN ANY VEHICLE ON THE PLANET. IT LOOKS LIKE A CAR SHOW EVERY TIME I
STOP FOR GAS. PEOPLE ASK QUESTIONS AT RED LIGHTS...I MEAN EVERYWHERE YOU GO! I HAVE OWNED ALL KINDS OF AWESOME
TRUCKS AND SPORTS CARS....NOTHING GETS MORE ATTENTION THAN THIS MONSTER....PERIOD!