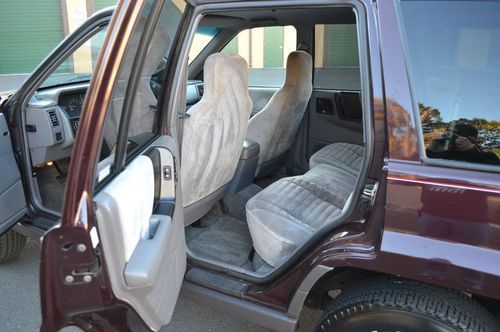 1995 Jeep Grand Cherokee. Very good condition considering the mileage and age. There is a little rust forming under the lip of the rear hatch, and as you can see in one of the photos, the headliner is just starting to come apart at the edge of the drivers door area. Seats are clean and free of stains, no rips or tears in them. Spare tire in rear along with the netting and overhead privacy tarp to cover any luggage or personals in the rear. New brakes were just installed in the late fall of 2012 and a new water pump around the same time. The only flaw on this jeep to my standards is that the hood latch broke and I jerry rigged it on the front to open. So, it does not open from the inside any more. The jeep burns absolutely no oil, but does have the typical leak at the oil filter area where it does drop a few drops each night. That is all. If you would like to come and see or would like more pictures or questions answered feel free to email me or call me. If I do not answer I will call you back as soon as I can. Thank you.

I also have a set of four ProLine alloy wheels and tires I would sell for an additional $500 if any one is interested in purchasing them with this Jeep. This is a stock photo of the wheels that I would be selling. Tires are not the ones shown in the picture.