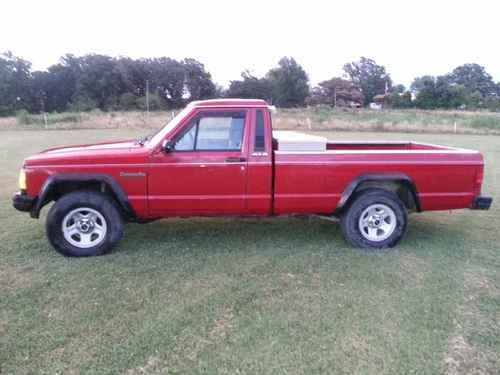 Condition: UsedA vehicle is considered used if it has been registered and issued a title. Used vehicles have had at least one previous owner. The condition of the exterior, interior and engine can vary depending on the vehicle's history. See the seller's listing for full details and description of any imperfections.Seller Notes:"TRUCK HAS VERY SMALL RUST SPOT ON ROCKER PANEL UNDER PASSENGER DOOR. ALSO HAS A SMALL DING ON THE REAR PASSENGER SIDE QUARTER PANEL. SEE PICS."
1990 JEEP COMANCHE…
THIS IS YOUR CHANCE TO OWN A
GREAT RUNNING GREAT LOOKING JEEP!
ONLY HAS 149,505 ORIGINAL MILES!!!
4X4…  2-DOOR REGULAR CAB…  LONG BED PICKUP…  W/ A 4.0 LITER INLINE 6 CYLINDER ENGINE…  AND AN AUTOMATIC OVERDRIVE TRANSMISSION…
DIAMOND PLATED BED CAPS AND TOOL BOX AND RUBBER BED MAT. BOX IS IN GOOD SHAPE.
THE INTERIOR STILL LOOKS GREAT. NO RIPS.
EXTERIOR COLOR IS RED.  GREY CLOTH INTERIOR.
EQUIPMENT THIS VEHICLE HAS INCLUDES (COLD) AIR CONDITIONING, POWER STEERING, POWER BRAKES (FRONT DISC), SPORT STEERING WHEEL, BENCH SEAT, CONSOLE, AFTERMARKET AM-FM STEREO W/ CD PLAYER, SLIDING REAR WINDOW, TINTED VENT VISORS, BLACK FENDER FLARES, GOOD MATCHING 235/75/15 TIRES ON STEEL WHEELS
THE TRUCK RUNS AND DRIVES GREAT WITH NO ISSUES.
I RESERVE THE RIGHT TO END THIS AUCTION AT ANYTIME.
SOLD AS IS WHERE IS. WINNER MUST TRANSPORT. I MAY BE ABLE TO HAUL FOR A FEE.