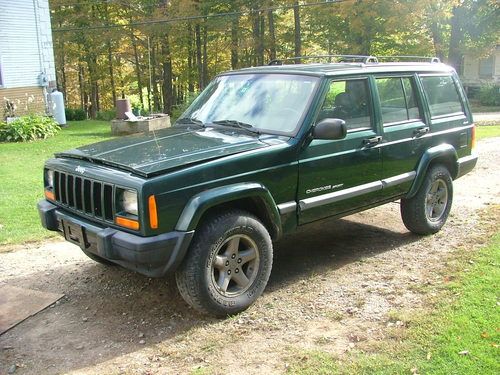 Condition: UsedA vehicle is considered used if it has been registered and issued a title. Used vehicles have had at least one previous owner. The condition of the exterior, interior and engine can vary depending on the vehicle's history. See the seller's listing for full details and description of any imperfections.Seller Notes:"Damaged front passenger door and windshield pillar. Cracked windshield and dented fenders. Front floor pans rusted - should be replaced."

I have for sale a low mileage 2001 Jeep Cherokee Sport Utility which was in an accident in Burlington VT in December of 20011. The owner's Vermont insurer classified it as a total, which doesn't really make sense, even based on the inflated dealership repair quote ( I have a copy). I found this vehicle at our local salvage yard. They had it put aside as repairable, which it most certainly is!

2001 was the last year for this classic Jeep. Chrysler updated the drive train (low pinion Dana 30 rear axle) and (distributorless) ignition., which compliments the rock solid 4.0L cast iron in-line six motor. I have had a number of these Jeeps over the years and still admire them. I'm reluctantly selling this vehicle because quite frankly, I have too many other pressing projects! I'd rather pass it along to someone who's going to use it, than have it continue to sit in dry storage.

Some of the impressive things about this Jeep are the complete service history (extensive), the incredibly clean interior and overall condition. The carpets, seats, headliner and vinyl are almost mint. I've seen a bunch of these cars over the past 10 years, and that's the first thing that grabbed me when I saw it.

The drive train only has 96,270 miles and has been starting and running very strong. These engines are known for their power and longevity. The body damage does not affect handling or performance. Once started, the car runs perfectly on the alternator. However, I think the crank sensor module is going bad, as I've had to move the shifter to neutral to get it started recently. I just purchased an after market crank sensor for my '99 Cherokee on eBay - cost - @$40.00. Consequently I would say that the car currently has starting issues. The alloy wheels are in good condition, but the tires are worn. Most options appear to work fine, however,  the radio is out - may need a fuse.

With the exception of the damaged areas on the passenger side, the paint is in excellent condition, There are a couple of other minor dents here and there, which may have happened when the car was transported - they can probably be popped out. The hood is mint - opens and closes perfectly.

I purchased mint salvaged fenders (LH + RH) and a mint front passenger door - all in white, when I acquired the car in April, 2012. My understanding is that the headliner will need to be pulled away on the passenger side to access the underside of the roof to repair the damage. The headliner is currently in mint condition - so care's needed doing that project.

The passenger side rocker will need to be replaced. The driver side rocker panel has surface rust, but is sound. All three doors open and close perfectly and the damaged passenger door opening appears to be OK, but until the damaged door is removed, we won't know for sure.

There is corrosion on both front floor pans. New pans are $81.00 each on eBay. I'm replacing them (along with the rockers) on my 1999 this fall. The front seat mounts have surface rust, which is normal for cars which have spent time in the snow belt. Other than the front floor pans, there does not appear to be any significant rust on the underside. The exhaust is good, but is probably an older replacement.

That's about it - this is a really nice Jeep, which if repaired should give many more years of good service - or buy it for the excellent drive train and interior. You won't go wrong!!