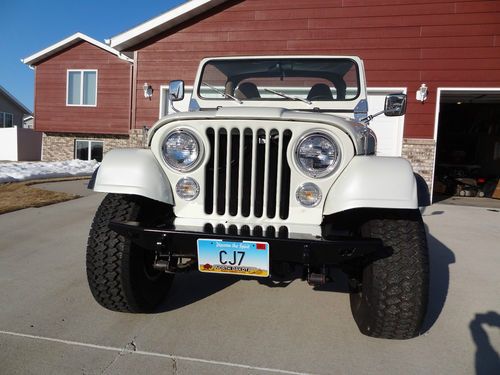 Condition: Used: A vehicle is considered used if it has been registered and issued a title. Used vehicles have had at least one previous owner. The condition of the exterior, interior and engine can vary depending on the vehicle's history. See the seller's listing for full details and description of any imperfections. ...
This is a completely restored 1984 AMC Jeep CJ7 with an automatic transmission and AMC 401 V8.
This was a complete frame off restoration.  All stainless steel hardware was used - bolts, accessories, etc.  The frame and bottom of body panels are done in POR15.  The paint is a pearl white clear coat.
The Jeep was originally equipped with a 258 I6.  It is now equipped with an AMC 401 with a TF999 auto transmission and Dana 300 transfer case.  A completely new Painless Wiring harness was installed.  The Jeep has a 4" lift with 33" tires and aluminum wheels.
I recently installed a new soft top.  The Jeep is also equipped with a tonneau cover, bikini top, wind jammer (wind screen behind front seats), and a padded roll bar cover.  I also installed a center console with Alpine stereo with auxiliary inputs.  Along with the stereo, I installed four Polk speakers.
The Jeep is equipped with Warn front and rear off-road bumpers along with a rear bumper mounted tire carrier (no spare tire or wheel is included).  The finishing touches go on and on...
I have a clear title for the Jeep.  As indicated in the listing, the title is branded salvage as the Jeep suffered an engine fire before the restoration (when it had the original I6).  The restoration that followed included all new sheet metal up front including fenders, grille, and hood.  The Jeep was inspected and approved by the ND Highway Patrol and is currently licensed.
Over $20,000 has been invested by the previous owner and myself to complete this Jeep.