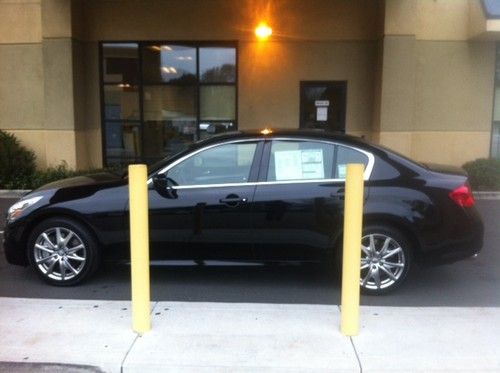 Condition: Used: A vehicle is considered used if it has been registered and issued a title. Used vehicles have had at least one previous owner. The condition of the exterior, interior and engine can vary depending on the vehicle's history. See the seller's listing for full details and description of any imperfections. ...
2012 Infiniti G37 S SPORT Edition

You are viewing a simply STUNNING Triple black matched with a subtle black leather 2012 INFINITI G37 S SPORT SEDAN in absolute MINT condition!!!!! This is a VERY RARE S model which includes a standard Automatic transmission/Paddle Shifters/ sport suspension/ Larger wheels and disc brakes/ SPORT Ricaro type seats and .........3.7 liter V6 engine mated to a super Automatic transmission that drives this vehicle out of its shoes with relentless power----A simple push of  accelerator and this vehicle will be going side to side--Just amazing amazing power!..........Only 300 miles --- Hardly ever owned..........VOICE ACTIVATED NAVIGATION system with pinpoint map accuracy anywhere and delivers all the goodies and mp3 gadgets and POI you may need all laid out beautifully on a 7 inch media screen------This NAVIGATION system is mated to a super deaf sounding BOSE stereo sound system which really needs no explanation...........RICARO type SPORT seats which feature a pull out thigh support recliner on DUAL ends...........Power sliding and tilting moonroof.............XENON powered headlights...........Rear view Camera...........18" Premium Infinito SPORT ONLY high brushed aluminum wheels in superb condition to match with 18 " premium sport tires............Dual HEATED power seats which include lumber support as well.............REVERSE BACK UP CAMERA which displays crystal clear live video images while vehicle is in reverse mode............REAR BACKUP SENSORS which alert you when backing up to an object by sounding off an alarm..........Cruise Control...........Push button start which recoginzes the key and eliminated the needed key..............Gorgeous Satin nickel interior trim............Vehicl Anti-theft............Vehicle skid control..........Steering wheel controls............Leather wrapped steering wheel and so much more!!!!...........This vehicle as noted above is in absolute MINT condition in/out with an amazing color combo to match the SPORT TRIM.

This 2012 G37S will come with a Salvage title due to a minor incident.....This vehicle did NOT sustain any water damage whatsoever.....I went over every single corner of this vehicle and found no Flaw this car is in amazing condition with only 300 miles. I changed a few parts because of the incident on this amazing vehicle. Feel Free to contact me for any information you need. you will not be disappointed.

I have pictures available of when vehicle was purchased from the auction .....Feel free to ask for pics.

Feel free to reach out with any questions

Note: No warranty is stated or implied

Will assist in shipping the vehicle to your desired destination - Buyer pays any shipping expense.