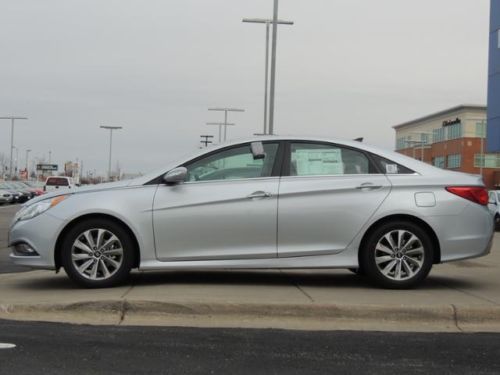 The new Hyundai Sonata just made its debut at the 2014 New York Auto Show, but it's already begun making its slow march towards dealers, meaning it's about time we start seeing ads for the new family sedan on the TV and internet. This 62-second spot is one of the first.
The ad places a particular focus on styling, and what great design really is. There's also a glimpse at the super-cool gesture control that's baked into the Sonata's infotainment screen. We'll admit, we're pretty geeked to give this feature a full test once we finally drive the all-new sedan.
As for when that will be, with the car set for an arrival at dealers this summer, we're hoping to have a full write-up on the 2015 Sonata soon. Until then, scroll down for the full ad from Hyundai.

Speed cameras are something of a foreign curiosity for many drivers in the US. Sure, there is sporadic use of red light cameras here, but the cams to catch speeders are much more popular in Europe. However, Hyundai might have created a way to end that scourge for our foreign auto enthusiast compatriots. The Korean automaker recently showed off a system on the Genesis at its headquarters in Seoul that could detect and automatically slow down for the nefarious devices. It could make many speeding tickets a thing of the past.
According to Australian website Drive, the Genesis' tech is actually a simple integration of already existing structures. It combines a navigation system programmed with the locations of speed cameras and the sedan's automatic braking. Drivers get an audible warning about a half-mile beforehand to slow down, and if they don't the car can do it for them.
Unfortunately, this potentially money-saving tech isn't leaving its domestic market anytime soon. "This is offered only in Korea and not planned for the US. In Korea, many cars with smart cruise control offer this and it is viewed as a safety feature," said Hyundai spokesperson Jim Trainor to Autoblog via email.

Hyundai is preparing to make a rather bold move with its Genesis, as reports are now stating that the next-generation rear-drive sedan, which we showed you earlier this week, will be sold in Europe. The first-generation of the Genesis sedan never crossed the pond.
The 2015 Genesis will enter the traditional stomping grounds of BMW, Mercedes-Benz and Audi armed with the same 3.8-liter V6 and 5.0-liter V8 found in the current model. All-wheel drive, a first for the model, will also be available in Europe. "We have to overcome the challenge of competing with established European brands. We expect the Genesis to play a crucial role in improving our brand recognition," Hyundai said in a statement.
Hyundai has done a fair job of changing its image in the US from a budget-minded brand into a legitimate, mainstream competitor that covers a broad swath of the American market, offering cars from the $14,545 Accent to the $61,000 Equus. That movement started in earnest with the Genesis, and it looks like Hyundai is determined to repeat that models success in Europe.