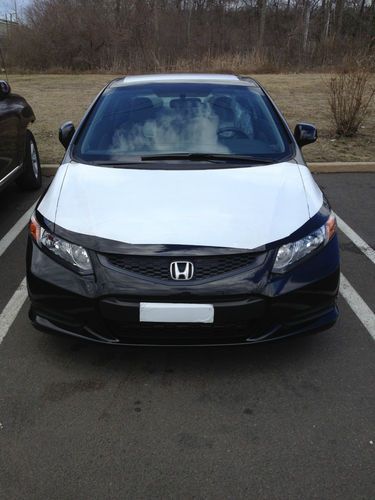 Condition: New: A vehicle is considered new if it is purchased directly from a new car franchise dealer and has not yet been registered and issued a title. New vehicles are covered by a manufacturer's new car warranty and are sold with a window sticker (also known as a “Monroney Sticker”) and a Manufacturer's Statement of Origin. These vehicles have been driven only for demonstration purposes and should be in excellent running condition with a pristine interior and exterior. See the seller's listing for full details.  ...
NEW FLOODED 2012 CIVIC LX COUPE
This is a 2012 CIVIC that was flooded during Sandy while in the DEALERSHIP LOT
This car is or was BRAND NEW, never got registered, never driven.............got out of the dealer lot.
The car does not start, no lights on the dashboard.
The car is clean in and out.
Would guess that the water level was not high due to the fact that the seat colors or textures did not change and the manuals are still new, no water touched them.
This car has a salvage flood certificate
we will assist in shipping, locally or overseas.
the car is located in Sayreville, NJ
for any more info please e mail or call Mohamad  908-251-4846

If you are looking forward to the launch of the 2015 Honda Fit and can't wait to buy one, we have some bad news. Honda is holding off on sales a little longer to make sure everything is just right. The brand's latest subcompact was originally scheduled to start arriving at dealers this spring, but the introduction was delayed due to issues at Honda's new factory in Celaya, Mexico.
Consumer Reports learned of the delayed launch when the Fit it ordered didn't arrive on time. It contacted Honda and was told that the problem had to do with a "shipping delay nationally." The company was taking "a measured approach" to getting the new models out of the new factory, thus delaying shipment to dealers until June.
Honda spokesperson Steve Kinkade gave a few more details about the situation to Autoblog. He indicated that the factory in Mexico is new and is producing these vehicles for the first time. Therefore, the company is taking the extra time "to do a final verification on quality," said Kinkade. He also confirmed the delay until the second week of June.