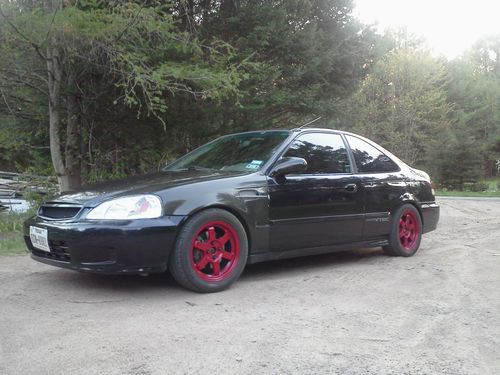 Condition: UsedA vehicle is considered used if it has been registered and issued a title. Used vehicles have had at least one previous owner. The condition of the exterior, interior and engine can vary depending on the vehicle's history. See the seller's listing for full details and description of any imperfections.Seller Notes:"Motor was rebuilt with Forged Pistons and Rods 6000 miles ago and tranny is stock Si with 22000 miles on it with Stage 4 clutch. Axles are also upgraded to Driveshaft Shops 600hp axles"

I have a 1999 Honda Civic Si for sale that was built by Hennessey Perfromance's Tuner School. This car was built as a drag car and converted to being my daily driver. I have owned it for about a year but now that I live in the North Country looking for something with 4WD. It's been a great daily driver and runs great. It's super fast and I have been averaging 26-28 mpg. I have it de-tuned to about 325 hp but is built for 600hp. All components are top of the line and have too many to list. To name a few:

Any questions please call five four zero-four five five-65 six five. I have recently moved to the area so I still have my old cell phone number. If I do not answer please leave a message.