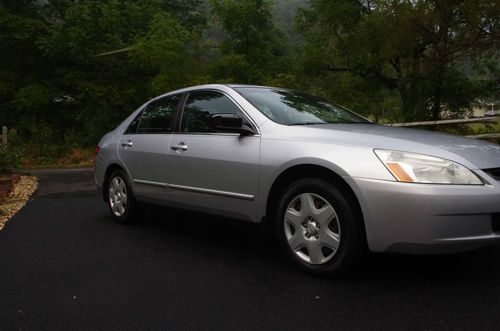 FOR SALE:  2005 HONDA ACCORD LX, 3.0L V6.  ONE OWNER.  VERY GOOD CONDITION.  RUNS AND DRIVES GREAT.  EXTERIOR IN VERY GOOD CONDITION WITH JUST A COUPLE PAINT CHIPS AND MINOR SCRATCHES.NO ACCIDENTS, NO PAINTWORK. THE MIRROR COVER ON THE PASSENGER SIDE IS MISSING BUT CAN BE FOUND HERE ON EBAY FOR ABOUT $25 (SEE PIC).  THE INTERIOR IS IN GREAT CONDITION WITH NO RIPS, TEARS, CIG BURNS, ETC.  I HAD A LOCAL MECHANIC GO THROUGH IT FROM TOP TO BOTTOM.  HE SAID THAT THE FRONT MOTOR MOUNT WAS WEAK AND WOULD RECOMMEND THAT IT BE REPLACED IN THE NEAR FUTURE. TIRES ARE PROBABLY 60-70%.  I DRIVE THE CAR OCCASIONALLY, SO THE MILEAGE MAY VARY SLIGHTLY.
I'M PRICING THIS AT A VERY LOW STARTING BID WITH NO RESERVE.  A $500 NON REFUNDABLE DEPOSIT IS DUE WITHIN 48 HOURS OF THE END OF THE AUCTION WITH THE REMAINDER DUE WITHIN 7 DAYS.  THE WINNER OF THE AUCTION IS RESPONSIBLE FOR THE PICKUP OR DELIVERY OF THE CAR.
PLEASE CONTACT ME WITH ANY QUESTIONS OR CONCERNS.
THANKS AND GOOD LUCK !!