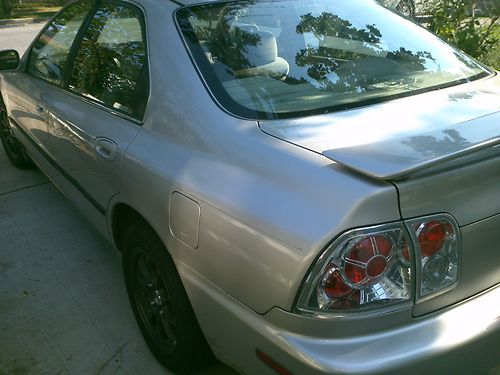 Condition: UsedA vehicle is considered used if it has been registered and issued a title. Used vehicles have had at least one previous owner. The condition of the exterior, interior and engine can vary depending on the vehicle's history. See the seller's listing for full details and description of any imperfections.Seller Notes:"NICE CUSTOM / MUFFLER/ TAIL LIGHT ANGEL HEADLIGHT . ENGINE TRANSMISSION GREAT 5 SPEED NEW CLUCTH"
FULLY LOADED 97 HONDA ACCORD HOOK UP AND READY TO DRIVE ANY WHERE
THIS IS A SPECIAL SILVER HONDA ACCORD  , LX VERSION
BEAUTIFULL 1997 HONDA ACCORD , GREAT SEATS VERY CLEAN, ONE OWNER NY TITLE  125,000 MILEAGE   ,ENGINE AND TRANSMISSION SUPER PERFECT ,CAR IS VERY NICE AS YOU CAN SEE , 80 PERCENT CLEAN. NO RADIO . AC/HEAT WORK GREAT,NEVER BEEN IN NO ACCIDENT ORIGINAL PAIN CLEAN. CAR WAS WELL KEEP.ITS UNBELIEVABLE. THIS CAR WILL LAST ANOTHER 10 YEARS. I DO NOT SEE ANY COMPLAIN ABOUT THIS CAR.I DROVE IT WAS REALLY SMOOTH SHOCKS ARE FINE,NEED ONE FENDER/ITS DENTED.
CALL ME TO SEE IT 718 772 8154. DETAILS
THE PICTURE OF THE CAR COULD TALK FOR IT. GREAT IN  GAZ .I DROVE THE CAR,I COULD NOT BELIEVE HOW SMOOTH AND GREAT THE CAR DROVE
NO SCAMMERS/ I CANCEL BIB OF 1,2,3,4,5 FEED BACK
ANGEL LIGHT $200
CUSTOM MUFFLER NICE NOISE $300
RIMS  $700
ENGINE VERY CLEAN
5 SPEED NEW CLUCTH / great price car wont last
CUSTOM TAIL LIGHT $ 150
MAKE YOUR TOTAL  THIS is A PROVE THAT  MY ASKING PRICE IS NOTHING

Petrolicious profiles an 'original fanboy' and his 1987 Honda CRX Si

Christopher Hoffman is a guy I'd like to meet. He's profiled in the latest installment of Petrolicious, titled Original Fanboy, because of his love and dedication to his 1987 Honda CRX Si. And that's something I can relate to.
My personal car is a black 1988 Honda CRX Si. Road & Track executive editor Sam Smith sold it to me in December 2010 with some 93,000 miles on the odometer (and one bum tire!), and though I don't drive it nearly as much as I should, I'm madly in love with my little Honda. I take immense pride in owning this car, despite my recent neglect. As soon as we're done with this Polar Vortex crap here in the midwestern United States, I'm going to pull the CRX out of its wintertime storage and show it the love it deserves.
Like me, Hoffman fully understands the beauty of the CRX. It's not super powerful, or even quick (when it was new, its 0-60 time was just over 9 seconds), but it's extremely light, and comes from an era when Honda was churning out brilliantly simple cars. The steering is incredibly precise, the transmission perfect, and the chassis superb. Nearly 26 years after its birth, I adore every moment behind the wheel of my CRX. And thanks to this Petrolicious special, I know I'm not alone. Scroll down to watch the full episode.