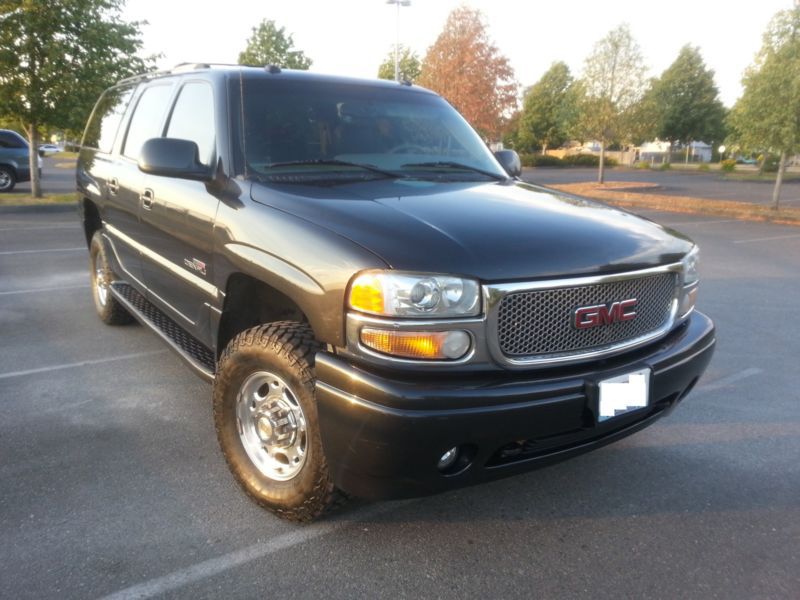 2003 Yukon XL Denali that I swapped an LLY Duramax turbo diesel & Allison 1000 into.
This combination was never offered from GM. They never brought their great Duramax Turbo Diesel engine into their
full size SUV line-up.
Yukon XL had 156k on it before the swap, and is in very respectable condition. Paint is metallic gray with light
gray two tone interior. Exterior and interior of my Yukon is really nice. There are a few minor cosmetic blemishes,
a few paint scratches and very minor dings, but overall the vehicle is in quite good shape. It is loaded like all
the Denalis are, heated front and rear seats, power leather, DVD player, BOSE sound system, Dual-zone HVAC with
rear A/C system, OnStar, XM, etc. This is a 2nd row bench configuration.
The engine was out of a 2005 Silverado 2500HD, with 109k on it now. Same for the Allison transmission and 11.5"
rear axle.
I really took my time doing this swap, there was a lot of work involved.
These Denali package Yukons come only as half tons, so I purchased a 3/4 ton frame to hold the Yukon and the
Duramax together. This gives the vehicle a full 3/4 ton frame, suspension, axles & brakes so that it is truly
capable of handling heavy loads the Duramax was designed to pull. The rear axle is from the Silverado, so it is the
11.5" GM 14-bolt full floating axle with a mechanical locker.
This vehicle has already gone through a Washington state inspection and I have all paperwork in hand to transfer a
free and clear title into the new owner's name.
Specs:
Body: 2003 Yukon XL Denali
Engine: 2005 (LLY) Duramax turbo diesel (305hp - 605lb-ft)
Transmission: Allison 1000 5-speed automatic
Rear Axle: 11.5" GM 14 bolt full float 3.73 ratio with G80 locker
Front Axle: 9.5" IFS
265/75R16 Mud Terrain tires with lots of tread left.
Frame: 3/4 ton
Vehicle is fully serviced and ready to go. I replaced the problematic GM transmission cooler lines with Alligator
performance lines that won't leak, it has fresh oil & filter, fuel filter, transmission fluid and filter, and fresh
engine coolant.
100% transparency on this sale. There is currently a small oil leak. I've just been too busy to look at it.
These low mileage pre-2007 emissions diesels are getting tough to find. This Duramax has no DPF, no DEF fluid, no
SCR. No emissions headaches to worry about. Just tons of power, excellent reliability and great mileage.
Everything on this rig works, and works well. Seats 8 people in comfort, and would safely and easily tow 12k lbs up
over the pass.
A/C just recharged.
Fuel economy on this rig is excellent, relatively speaking. With a conservative driver, expect about 15 in town,
and 22 on the highway. I've been averaging about 19.5 on my work commute of a mix of stop and go and highway. Road
trip steady cruising at 60-65mph, I've seen 24MPG. That's really good considering what this vehicle is capable of.
This LLY Duramax is mostly stock and untouched. The only non-stock parts are a cold air intake, and a 4" exhaust.
No software reprogramming has been done. Runs very well. Pulls strong just like it should.
This is a very rare find. I've built a couple of these swaps, never on a Denali before.
Serious inquiries only. This vehicle is located in Monroe, Washington state