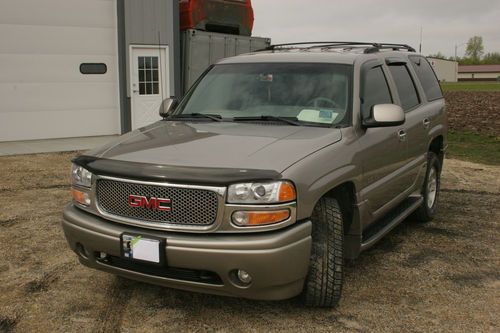 Must sell my 2001 GMC Yukon Denali. This SUV has the power to haul with the 6.0 Liter V8 engine, but rides more like a Cadillac! This Yukon has a very clean exterior! The interior is relatively clean although the seats do show signs of wear. Heated first AND second row leather seating, third row seats, running boards, all wheel drive, aluminum (17") and chrome wheels (20"), trailer hitch, child safety locks, 4 wheel ABS, 4 wheel disc brakes (new rotors and pads 7/2009), keyless entry and aftermarket remote start, dark tinted glass. Non-smoker vehicle, most recent owner serviced with Mobil 1 fully synthetic motor oil! We have the current car fax. . . No damage history, no fraud alerts, 1 minor error, this vehicle is on its third owner, not the fourth. . .

Price Includes the 20" Chrome Rims (no tires) which have been not used in the winter since the current owner bought the vehicle in 2009. It also includes a set of standard GM rims and tires that were used as "winter tires."

This vehicle is kept at my Uncles small used car dealership for easy viewing. Please contact through eBay if you wish to view it.

My preference is for you to arrange pick-up of this vehicle yourself, however I am open to discussing other alternatives.  Bid with confidence, but you bid and win it is yours!

This vehicle is listed locally and I reserve the right to end the auction at any time in the case of a local sale.