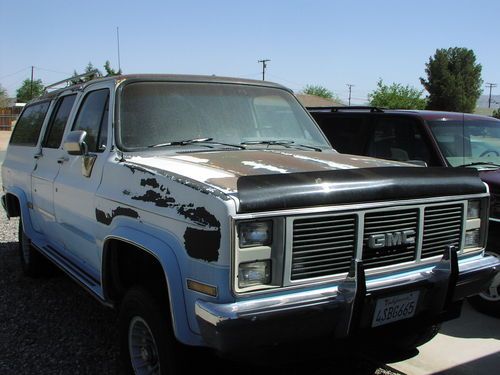 Condition: UsedA vehicle is considered used if it has been registered and issued a title. Used vehicles have had at least one previous owner. The condition of the exterior, interior and engine can vary depending on the vehicle's history. See the seller's listing for full details and description of any imperfections.Seller Notes:"88 suburban Four-Wheel-Drive Half Ton Has Both Differentials Has Been Gone through the rear differential has a GM locker Transmission Has Been Gone through 700 r transfer case has been gone through all new leaf suspension and shocks hijackers soft ride 3 1/2 inch painting has fallen off the vehicle surface rust the engine needs to be rebuilt other than that it is in really good condition it for you were to part the vehicle out you would stand to make 5500 the $7500 on parts alone I was building it to do some serious offloading on dirt trails and dirt roads has not been beaten or jumped it pulls a small 18 foot travel trailer just fine lost oil pressure in the engine just as I was pulling into my driveway should be a very good rebuild will engine when it was running right and tuned right I was getting 21 miles to the gallon on the freeway and will be a really good project all the work is done accept the engine and paint on the drive train itself there's probably less than 25,000 miles"

88 suburban four-wheel-drive Half Ton Needs Engine and Paint Everything underneath the Truck Has Been Gone through Both Differentials all new leaf Springs 3 1/2 inch left soft country ride new Shocks Transmission Transfer Case has Less then 25,000 Miles on It the interior is in pretty good shape the dashboard is cracked has a cracked windshield there is nobody cancer as real good tires on it lots of tread left on them should look at breaks I don't remember were they are at as far as where everything is probably due for a service it's been sitting since  2008 have non-op papers on it clear title have ownership papers in hand if there's any questions please feel free to ask