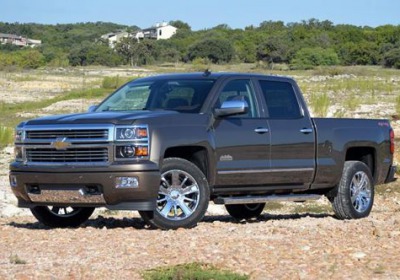 General Motors announced late Friday that it will recall around 370,000 Chevrolet Silverado and GMC Sierra fullsize pickups from the 2014 model year over a possible fire risk. The recall covers select 4.3-liter V6 and 5.3-liter V8 models, which can evidently suffer engine compartment fires due to the overheating of exhaust components. GM notes that the fire issue may be preceded by a check engine light and an "engine power reduced" message on the driver information display.

Thus far, GM is aware of eight fires stemming from this problem (although only three of those incidents affected customer-owned vehicles), and all of the fires were reported in areas with "very cold weather." GM is urging owners to not leave their vehicles unintended while idling. No injuries have resulted from the fires in question.

The Detroit-based automaker has pledged to start mailing out recall letters on January 16. The fix, which involves software reprogramming, is estimated to be a 20-minute repair, and will be made free of charge.

GM is contacting customers to alert them of the potential issue, which often is signaled by a continuous yellow "check engine light" and an "engine power reduced" message in the driver information center. GM has confirmed eight fires from this condition, three of which were on customer owned vehicles, but no injuries. All occurred in areas with very cold weather.

Recall letters will be mailed Jan. 16, but customers can contact dealers for appointments beginning early next week. The repair will take about 20 minutes, although dealership wait times can vary. Until then, customers are urged to avoid leaving their trucks to idle unattended.

GM told the National Highway Traffic Safety Administration it would recall about 303,000 trucks with 4.3-liter and 5.3-liter engines in the U.S. Approximately 67,000 additional trucks that were exported and sold in Canada and Mexico also are being recalled. Trucks with 6.2-liter engines are not part of the recall.

General Motors Co. (NYSE:GM, TSX: GMM) and its partners produce vehicles in 30 countries, and the company has leadership positions in the world's largest and fastest-growing automotive markets. GM, its subsidiaries and joint venture entities sell vehicles under the Chevrolet, Cadillac, Baojun, Buick, GMC, Holden, Jiefang, Opel, Vauxhall and Wuling brands. More information on the company and its subsidiaries, including OnStar, a global leader in vehicle safety, security and information services, can be found at http://www.gm.com