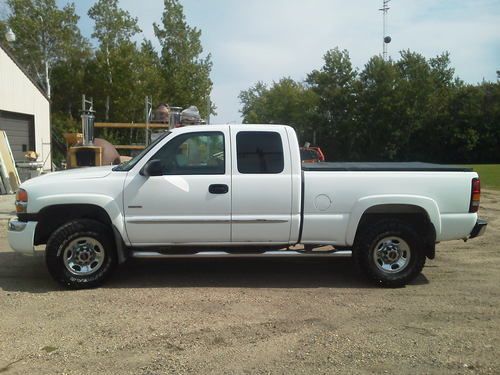 Condition: UsedA vehicle is considered used if it has been registered and issued a title. Used vehicles have had at least one previous owner. The condition of the exterior, interior and engine can vary depending on the vehicle's history. See the seller's listing for full details and description of any imperfections.Seller Notes:"Tear in the side of the drivers seat, a hole in the lower left side of the dash panel where a toggle switch was, a small dent on passenger door, {hardly noticeable} the normal dings and scuffs that you would find on a 2005 pickup."

2005 GMC 2500 HD Diesel. The bad stuff.... new tires are needed on the front. The alignment was off and wore out the front tires. I have had the truck alligned, but did not get new tires yet. The back ones are at about 75-80%. A small hole in lower left side of the dash where it looks like a toggle switch was installed. A small dent in the lower passenger door that is barely noticeable. A tear in the side of the drivers seat. Your normal scuffs and scratches on a 2005 pickup. The mileage reads 153,000 but is about 175,000. The dash panel was replaced and the mileage did not match up.

The pickup runs great. Most of the injectors were replaced around 90,000. The dealers thought the injectors were going and replaced the ones that were scanning as bad, I think it was 3 of them the first time. It happened again and they replaced two more and then one more time and 4 were replaced. I had not made it a mile from the dealer after replacing the last ones and it started running bad again. They finally figured out it ws the wiring harness and replaced that and there has not been a problem with it since. The following are some add on items. Truxedo box cover with built in tool box, Juice Edge with additude controller with 4 inch touch screen,  A Kenwood Excelon 7 inch cd/dvd touchscreen tuner, a power 1200w continuous/ 2400w start power inverter wired directly to the battery, full length tube side steps, snap on winter grill cover and mesh/bug grill cover, blue LED dash lights. The belt is fairly new, the starter is about a year old, much of the front end was rebuilt when alligned, the fuel and air filter were replaced about 6000 miles ago. It is due for an oil change soon. Kelly Blue Book list this pickup at $18,227.00 in good shape, which is what I would consider it to be.