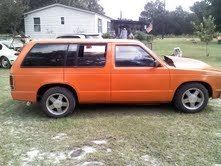 Condition: Used: A vehicle is considered used if it has been registered and issued a title. Used vehicles have had at least one previous owner. The condition of the exterior, interior and engine can vary depending on the vehicle's history. See the seller's listing for full details and description of any imperfections. ...
1991 GMC S-15 Jimmy


Shaved door handles, drop spindles, drop springs, new exhaust, 350 engine with 70,000 miles on it, not sure how many miles the body has on it.  Extreme wheels, cowl induction hood, snakeskin rear seats and door panels, new white face gauges.

Gas gauge not hooked up, 700R4 transmission only has first, second and reverse.

This vehicle is being sold AS IS, and if you want more pictures send a message. Buyer must pay $500.00 deposit within 48 hours of auction end and remaining balance must be paid within 3 days of auction end.  Can be picked up by buyer or we can deliver it for an additional fee depending on location.