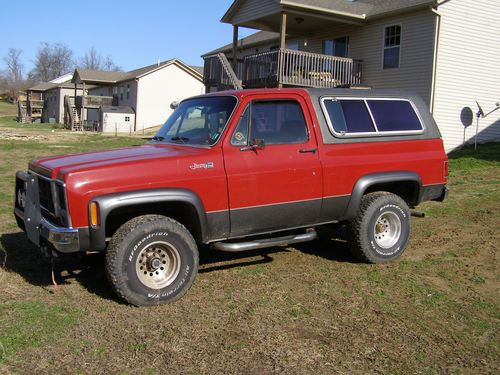 I purchased this vehicle new in 1979 and have been the sole owner. This has been my baby for 33 years I really do not want to sell but I am in a position that I need to sell. The truck does need some work the headers need to be replaced is the only have to item. I replaced the engine at 95,000 did not need to I got a deal for a new crate motor from GM The original motor I had put lifters and carb in my younger days wanted to go back to something with less maintenance hence I replaced with new motor I put Eldenbrock  manifold and original carb. Drivers seat needs to be recovered. Truck has extra leaf for 2 inch lift tires are in good shape. 8000 lbs Warn winch mounted under front bumper between frame rails.Custom overhead console for driving light switches and stereo with 4 speakers. New power window motors in the last year Dual battery setup under hood for winch and lights.Custom wheel flares. Transmission rebuilt less than 5000 miles ago. 4 wheel works good has manual lockouts.
I do have truck listed locally and is subject to cancel if sold