Ford Other Street Rod on 2040-cars 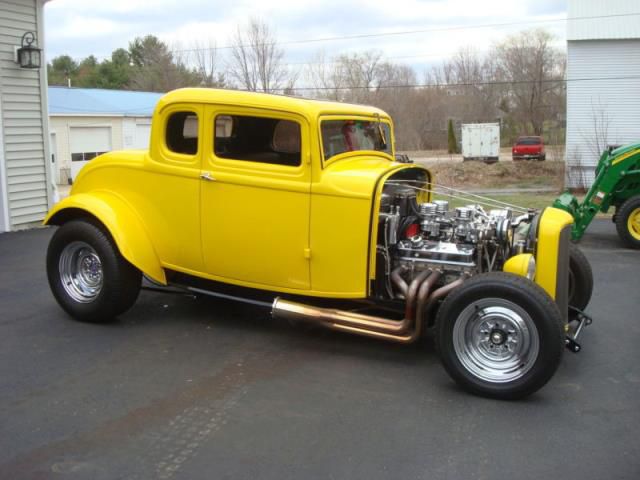 Up for sale is this real deal Henry Ford steel American Graffiti 5 window coupe(NO FIBER GLASS HERE). John Milner him self would approve of this beautiful deuce coupe! Has had a mild chop top with 32 grill shell shorten. The rear fenders are real steel and look killer. Has no front fenders. Has all new tinted glass and weather stripping. The paint has a mile deep shine and bright yellow just like the original Graffiti Coupe. All the body lines are crisp and arrow straight. The black interior is a work of art being done in a soft glove Leather. The seat is a power Wise Guild with a center arm rest seat belts. Options are polish steering column with tilt and custom steering wheel AC/Heat/Defroster over head high end stereo system with a CD changer in trunk area Custom dash with custom S/W gauges and RPM tack E-Brake custom shifter on the floor suede head liner with dome light. Doors panels have custom side pouches built in both doors. Battery is located in trunk area. The chassis is a top of the line with all welds grounded smooth painted in a high gloss black looks awesome. Currie Ford 9 inch rear end painted in a high gloss black you can shave in it. Hidden power brake booster. Rear suspension is a four link polish with high end adjustable shocks. Front suspension is all polish with tumbler A arms upper and lower also high end shocks. Wheels are chrome reverse with big and little tires super looking stance! Motor is a new ZZ/4 create engine with aluminum heads and 4 electronic fuel injection carburetors. Transmission is a auto and new as well. Motor runs cool with a Walker radiator with electric fan. Full stainless exhaust with electric cut outs. I have loads of paper work totaling well over a $105,000 put into this build!!