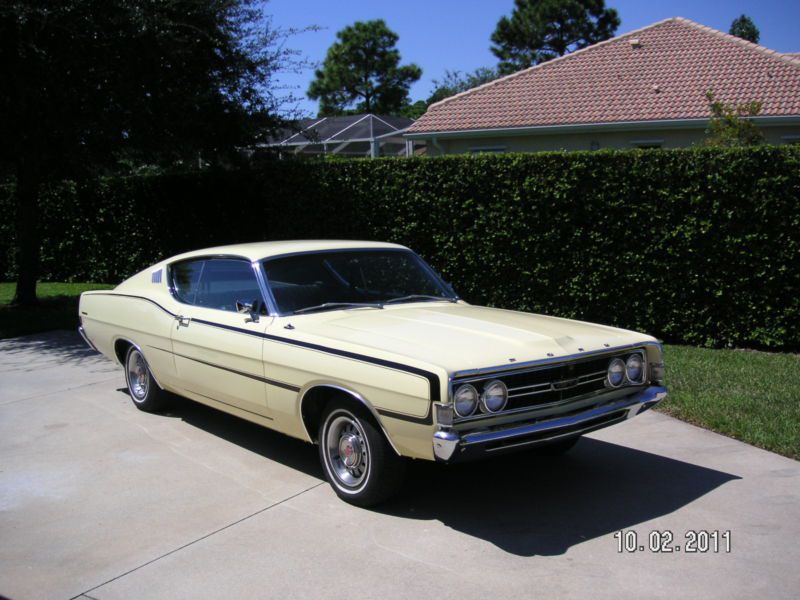 Just email me at: kierstenkelter@juno.com .

I purchased this rust-free, unmolested, original paint Meadowlark Yellow fastback, 302 cu. in. 210HP, C4 automatic
with console and bucket seats in 2010 along with the original owner's paperwork indicating it spent most of its
life in the Los Angeles, California area. The original paint was worn thin with primer beginning to show and the
trim needing to be refurbished. The car was completely stripped of all trim including the bumpers and re-chromed,
re-anodized, polished, or replaced. Minor body work was completed (none involving rust) and then painted in the
original color. I have all receipts and have each item listed line by line indicating total cost of $30,000
including the original purchase price. I have over 400 photos documenting the refurbishment and upgrading process.
NADA price report (2/20/16) indicates $33,000 High Retail. This price has been adjusted for air conditioning which
is the only adder included in the NADA pricing. Note the original A/C components have been changed to 134a from the
firewall forward including a new condenser and more efficient Sanden compressor. Added 3 relays (low, medium, &
high) to the blower motor which removes the electrical load from the original switch. The interior only required
replacement of the foam and upholstery on the driver's bucket seat and carpet. A new headliner had been installed
when I purchased the auto. I like the "porthole" dash presentation, but the speedometer is difficult to read, even
in daylight, I assume this is why Ford went to an argent background color in 1969. Rather than change the
background I installed a dimmer equipped strip of LED lights around the speedometer that are turned ON with the
ignition switch (operates day or night).. Quick list of upgrades: Self-winding shoulder seat belts. Does away with
the clumsy two buckle first year Ford shoulder belts. Fuse box added on radiator support.. Relays added for low and
high beam halogen headlights. Relay added to serve Sanden A/C compressor clutch. #8 gauge wire from new fuse box
location to (3) relays serving the A/C heater blower. Fire extinguisher mounted in trunk (required at most auto
shows). Automatic radio antenna. Operates up/down when radio is turned on/off. Power steering fluid cooler added in
return line to pump. Stainless steel radiator overflow tank. Grant wood steering wheel. Original, in good
condition, is also included. Ford Duraspark II electronic ignition. Voltmeter installed in clock location. Dual
exhaust. Exits in original locations behind rear wheels. Automatic transmission overhauled by local shop. The
flawless condition, upgrades, and recent addition of new rear brakes easily qualify this vehicle for the "High
Retail" NADA value.