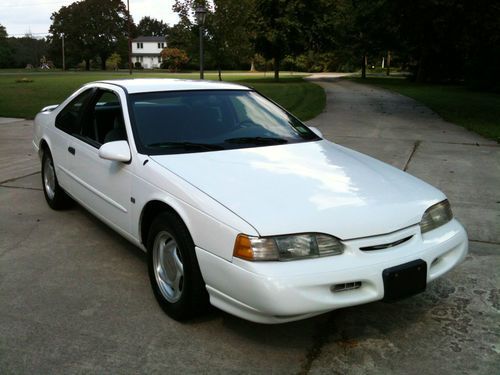 Well here you go folks, up for sale on e-bay for the very first time is a beautiful 1995 Ford Thunderbird LX 4.6L V8 coupe! A super maintained well kept car with very low miles for a eighteen year old car. The car runs & drives as good as it looks in the photos. Fly in & drive this wonderful car home! & that's all this car needs, is a new home. The matching four B.F. Goodrich tires are in good shape. Everything on this little T-Bird works, P/windows, P/seat, A/C, heat, intermittent wipers, Cruse control, Auto Transmission, Upgraded CD satellite radio, Upgraded Super Coupe factory aluminum wheels. It's all here for the new owner to enjoy!

I am a serious e-bay seller, so no triflers please, if you don't aim to purchase the car, DO NOT bid, because this is a ***NO RESERVE*** sale, the high bidder gets it!
Folks, this is not your typical junk car sold on e-bay, but a nice example of a T-Bird LX 4.6L V8 from 1995.  Look for your self at my e-bay rating, I take pride that what I describe is truly what you will be purchasing.
Well there you have it, a great opportunity to purchase a great T-Bird, you may find some cheeper, but not as nice!
Please call me on my cell phone, I will be pleased to answer any questions you may have regarding my T-Bird. Thanks for looking!
[609]-280-0064.