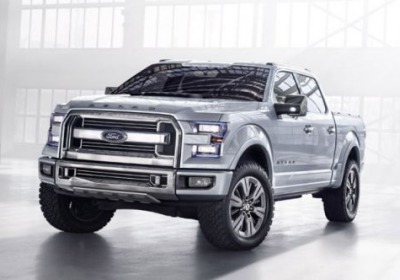 The timetable for next-generation Ford F-150 may be in trouble if a report from The Truth About Cars is true. The next F-150 is slated to make extensive use of weight-saving aluminum in its body, but the aluminum alloy provided by suppliers hasn't met Ford's requirements in the earliest phases of pre-production, according to the report.

The F-150 represents a huge portion of Ford's profits and is the best-selling truck in the US, even in the face of increased pressure from cross-town rivals General Motors and Ram. While the current truck is treading water against its competition, we'd be lying if we said the F-150 weren't growing quite long in the tooth.

If production of the next-generation of the Ford cash cow, said to be based on the Atlas Concept from the 2013 Detroit Auto Show (pictured above), is delayed, it could be bad for Ford. Production at Ford's Dearborn Truck Plant is already set to be delayed six to ten weeks, missing an internal on-sale deadline of Memorial Day.

As TTAC explains it (and without digging too deeply into chemistry and metallurgy), the issue with the aluminum alloy provided has to do with its elastic modulus - defined by the minds of Wikipedia as "an object or substance's tendency to be deformed elastically (non-permanently) when a force is applied to it." The elastic modulus in the aluminum provided to Ford is about a third of what's found in steel, making it difficult to form.

We reached out to Ford and were told by a spokesman, "We don't speculate on future products." We'll be sure to follow-up and let you know as more information becomes available.

See also: Toyota fears supplier pressure in Australia with GM pull out, This woman owns the first Ford Mustang sold in the US, Does the new 2015 Ford Mustang have a burnout control system?.