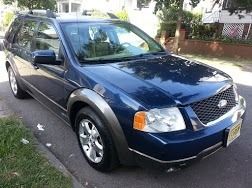 2006 Ford Freestyle SEL AWD 6cyl with Automatic Transmission, the Engine was replaced last month with 61000 miles on the the

replacement Engine, and did the tuned up for the transmission as well at the timethe engine was done. Please feel free to ask any

questions, i have the pictures of when the engine was done.

PLEASE BID ONLY IF YOU ARE GOING TO COMPLETE THE TRANSACTION